On October 27-28, 2022, the XIII International Scientific and Technical Conference “Innovations in Shipbuilding and Ocean Engineering” was held at the Admiral Makarov National Shipbuilding University. The conference is a long-standing tradition for scientists of the University and colleagues from other cities of Ukraine and countries of the world, who are waiting every year for an opportunity to meet, share the results of the latest research, expand the circle of scientific interests, learn the latest industry trends, and engage in discussions on topical issues. However, the missile strike of the University main building by the Russian aggressor, unfortunately, became an obstacle for the conference participants to meet live, so the event was held online. 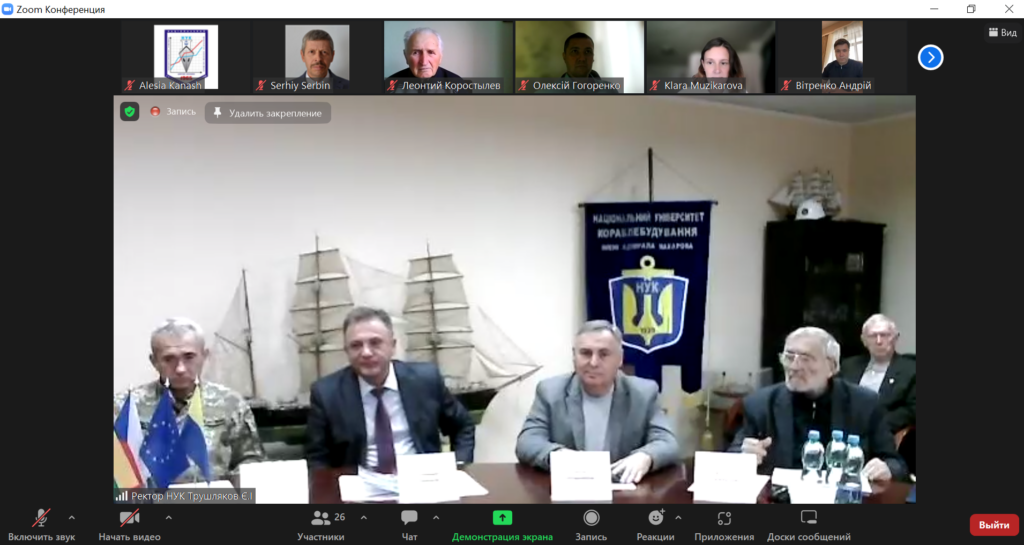 The Ukrainian Maritime Cluster, within the framework of the Mykolaiv Defense Cluster initiative, launched fundraising programs for Cluster members and partners for the restoration of educational institutions in Mykolaiv, including Admiral Makarov National Shipbuilding University. We invite you to join the donation via the link.

The purpose of the conference was to determine the priority tasks for the development of shipbuilding and the marine transport complex, to discuss innovative scientific and technical progress in shipbuilding and ocean engineering, and to find ways to attract investments in the development of domestic shipbuilding. This year, the conference was attended by 289 scientists who presented 200 reports, the work was carried out in 11 sections.

Olena Zhukova is a member of the organizing committee, and took part in the conference with the report “Organizational and economic basis of the rise of domestic shipbuilding” in co-authorship with Doctor of Economic Sciences, Professor Volodymyr Parsiak. 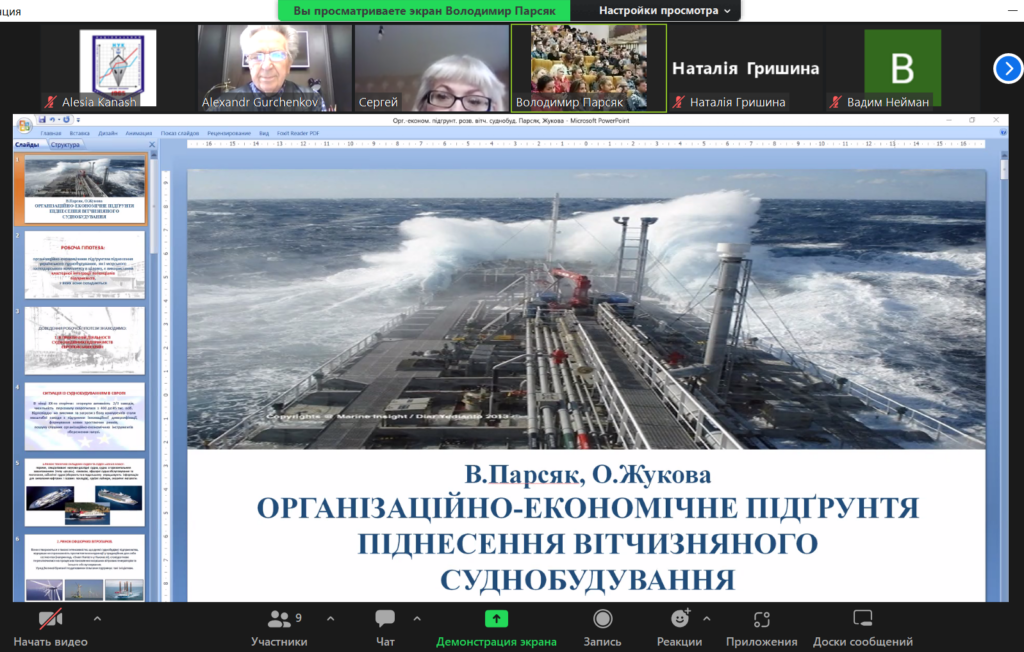 The report was devoted to outlining the views of its authors on the prospects opened up by the cluster integration of the potentials of the maritime economic complex enterprises for the restoration of capacities and strengthening of the competitiveness of shipbuilding businesses and others related to them. A number of cases are offered to confirm this working hypothesis. The purpose of the work was to obtain confirmation of the working hypothesis regarding the mobilization of the cluster potential of marine economic complex enterprises of Ukraine on the territory of its southern regions, which currently have become the arena of fierce opposition to Russian military aggression.

Here are the main theses of the work:

“The Ukrainian Maritime Cluster founders towards their goal relied on the experience accumulated by world practice. They built a bridge between sectoral cluster structures and opened up prospects for integration into the Blue Economy system. We believe this to be correct because shipbuilding is one of those businesses that creates the fixed capital elements for a whole range of other types of businesses: fishing, exploration and mining, marine offshore energy, mariculture, commercial and cruise shipping. The success of each and everyone together depends on how well they get along. Moreover, shipbuilding, as a ring of an extensive supply chain, fuels the business activity of related types of economic activity (metallurgy, machine and instrument building, engineering). 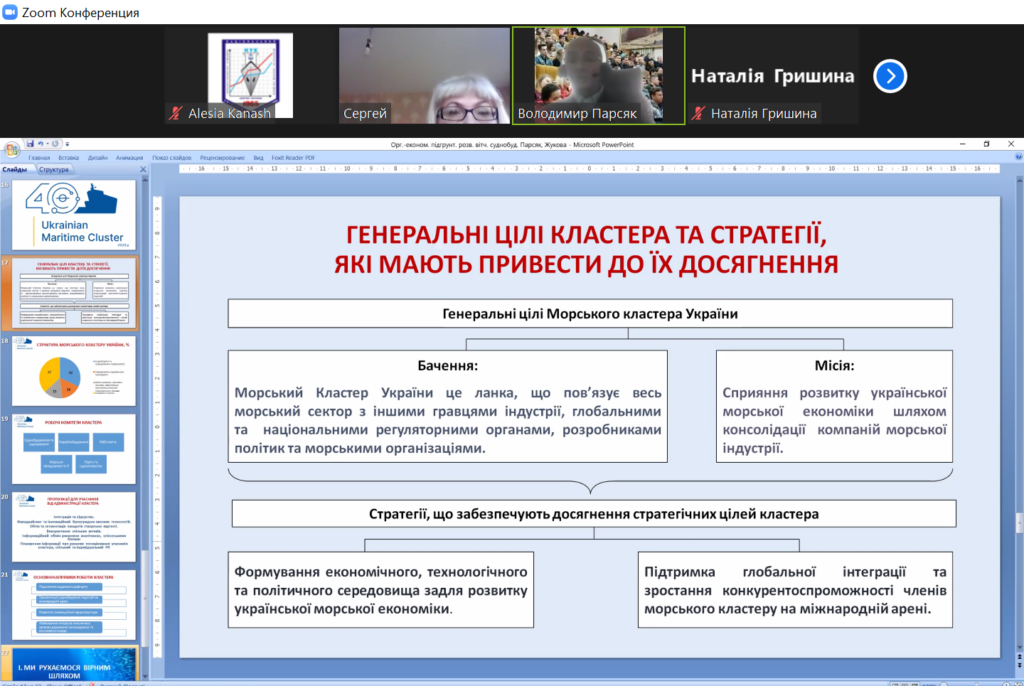 The given interpretation of the vision is continued by the formula of the Сluster mission. It should contribute to the development of the Ukrainian maritime economy due to the consolidation of the efforts of enterprises which create it. Issues of sustainable development of a climate-neutral, circular, productive Blue Economy are on the current agenda. Their solution is impossible without the decarbonization of maritime transport, the determination of emission control zones, a new vision of the role of ports, and the preservation and multiplication of natural capital. Therefore, joining efforts of all stakeholders is not only desirable, but also vital.

The shipbuilding industry of Mykolaiv region and Kherson region should become a model for others. Of course, after hostilities end on this territories. This directly follows from the results of the analysis of the first 19 members of the Cluster. Shipbuilding and ship repair enterprises make up 32% of them. Ship engineering enterprises – 16%. Business associations, business support centers, educational institutions, Mykolaiv territorial community administration – 15%. And the thing which attracts special attention, the related businesses – 37%. The idea turned out to be exciting, attractive, promising, full of optimism. It has found supporters who link its future with the prospects of shipbuilding that are gradually opening up. 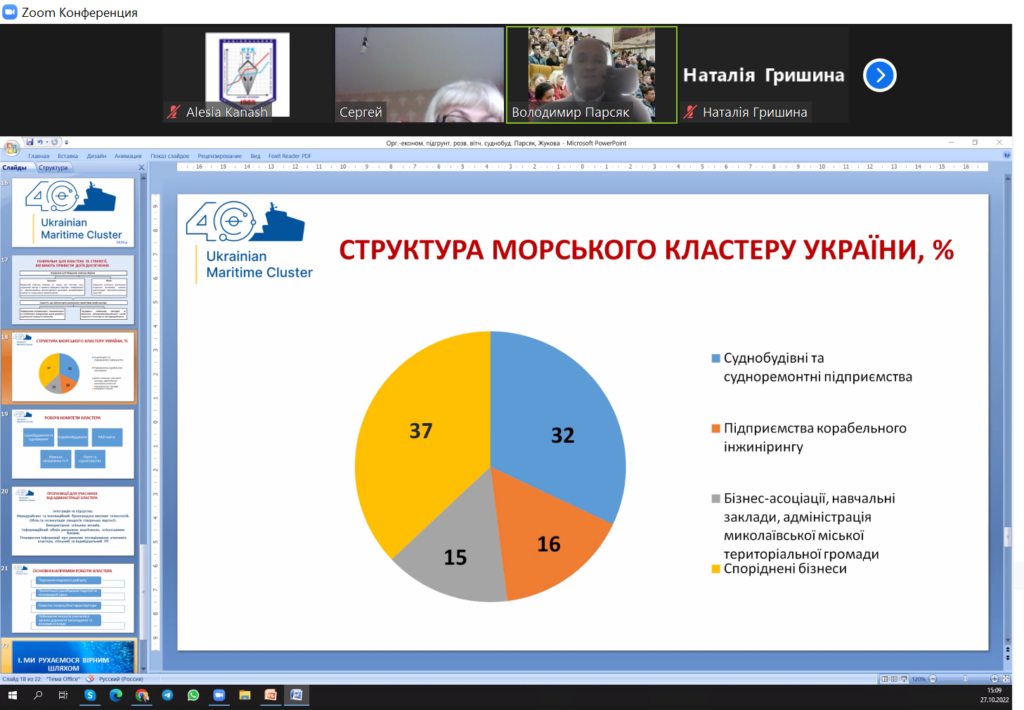 The war (the real one – brutal and relentless) was revealed. At the same time, we state that the business, overcoming incredible organizational complications and personal tragedies of employees, does not stop its activities. Like, in fact, the Ukrainian Maritime Cluster. Here are just a few examples:

It follows from the results obtained in the course of the research and proposed for discussion, that Ukrainian shipbuilding has a chance to recover and gain elevation despite the objective and subjective problems. Among the economic and organizational means of achieving this goal, the use of the potential of cluster integration has been identified and recognized as promising. It became widespread in the maritime states of the European Union, whoso experience was used by the founders of the Ukrainian Maritime Cluster. Its first steps give grounds to assert that the combination of efforts of the participating enterprises can significantly strengthen their competitiveness on the domestic and foreign markets despite the complications caused by the war.”

Also we would like to mention that the UMC participates in the 4BIZ grant project – Boosting Black Sea Blue Biz project is coordinated by the Black Sea Universities Network and brings together 9 partners directly involved in the implementation Consortium and 17 associated partners from Romania, Ukraine, Bulgaria, Turkey, Georgia, Greece and France, including regional development agencies, chambers of commerce, innovative clusters, universities and support organizations.

The 4BIZ Project aims to develop a collaboration framework that will bring together Blue Economy stakeholders in EU and eligible non-EU Black Sea countries to identify and tackle local capacity building needs to boost innovation, digitalization and investment in the Black Sea Blue Economy with the main focus on Fisheries and Aquaculture, Coastal and Maritime Tourism and Maritime Transport.

The project is funded by the European Commission, through the European Climate, Infrastructure and Environment Executive Agency, under the European Maritime, Fisheries and Aquaculture Fund (EMFAF) program, and has a duration of 24 months.

Therefore, we express our sincere gratitude to the organizers and participants of the 13th International Scientific and Technical Conference “Innovations in Shipbuilding and Ocean Engineering”, the team of the National Shipbuilding University for their dedicated work for the benefit of the present and future of the maritime industry of our country! 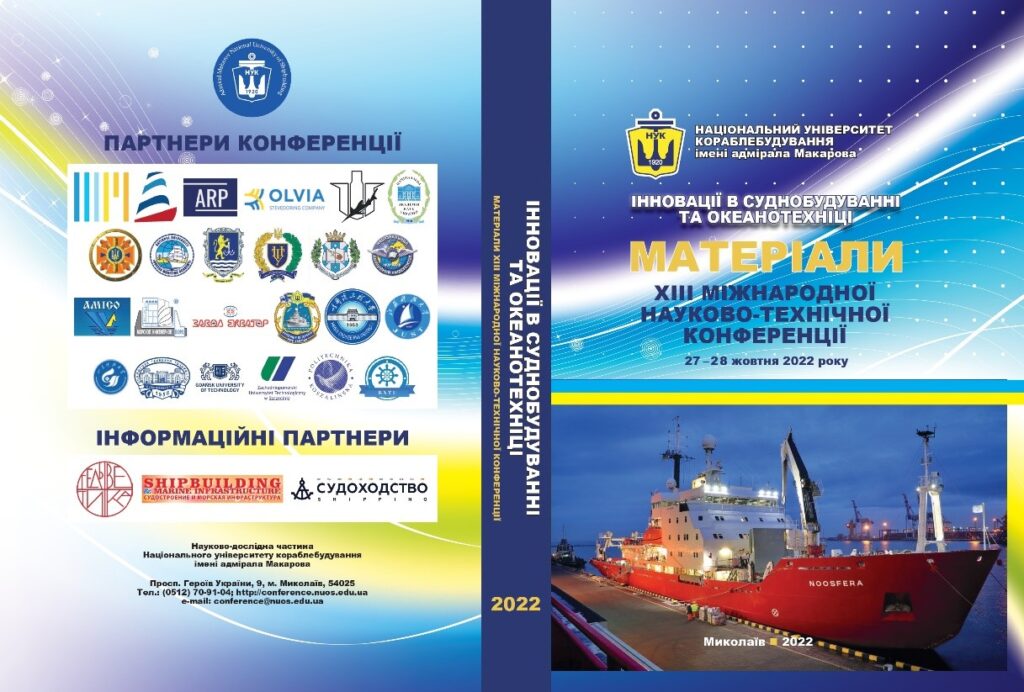