The meeting was organized with the support of the European Bank for Reconstruction and Development within the project of the Business Support Center to strengthen the institutional capacity of the Ukrainian Maritime Cluster and devoted to the presentation of research results and developments of working groups formed during the first strategic meeting, approval of the cluster development strategy and a regional initiatives package for the final of the national project “Integration 4.0”, which Mykolaiv hosts on March 9.

The strategic session was attended by 43 participants in online and offline formats. Among them are representatives of state ministries, associations, shipbuilding and maritime industries, and specialized regional educational institutions.


Yulia Itygina, an analyst at the European Bank for Reconstruction and Development, told about the history of cooperation between the EBRD and the Business Support Center in Mykolaiv. The network of European Business Support Centers was launched by the Bank as part of the European Union’s EU4Business initiative in 2016 in 15 Ukrainian cities to strengthen the capacity of small and medium-sized businesses, increase their competitiveness, maintain best practices and information on industry know-how. Then the BSC in Mykolayiv was selected by the Bank on a competitive basis among other candidates for deep knowledge of local business and good business reputation and became a reliable partner in the southern region of Ukraine. Well aware of the potential of its region, the Center took the initiative to establish the UMC and gathered around it scientists, businessmen and practitioners of the sector, representatives of specialized education and government. When the Business Support Centers network began to operate independently without donor support at the beginning of this year, the BSC in Mykolayiv took the responsibility to lead the network of centers further and coordinate its activities. The analyst thanked the BSC for their active and useful work and is looking forward to the results of UMC development activities. 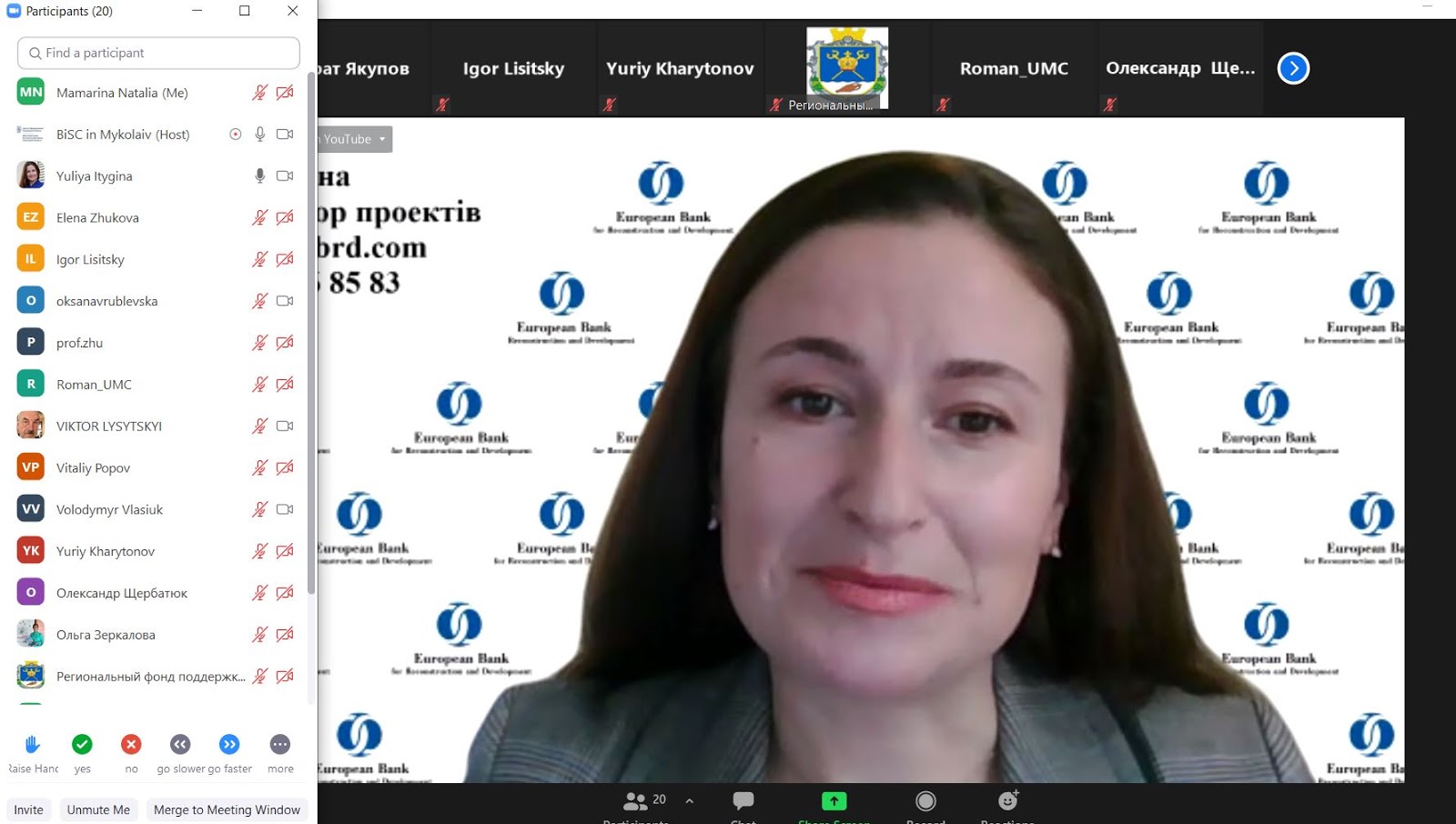 Artem Vashchylenko, Founder of the Business Support Center and Chairman of the Ukrainian Maritime Cluster Supervisory Board, thanked his colleagues from the EBRD for the opportunity to work in such a professional environment and focus on the development of the maritime industry, as this is a historically priority sector for the south of Ukraine, for the Mykolayiv region, so there is no doubt about its prospects. Artem Vashchylenko also stressed that the creation of the cluster was the starting point for the maritime industry of Ukraine development , which allowed to launch a cycle of activities and initiatives. One of them has already been implemented, and currently an analysis of the state of the industry has become available to members of the regional maritime community. The next step should be to join forces for even more powerful work and further implementation of industry development projects. 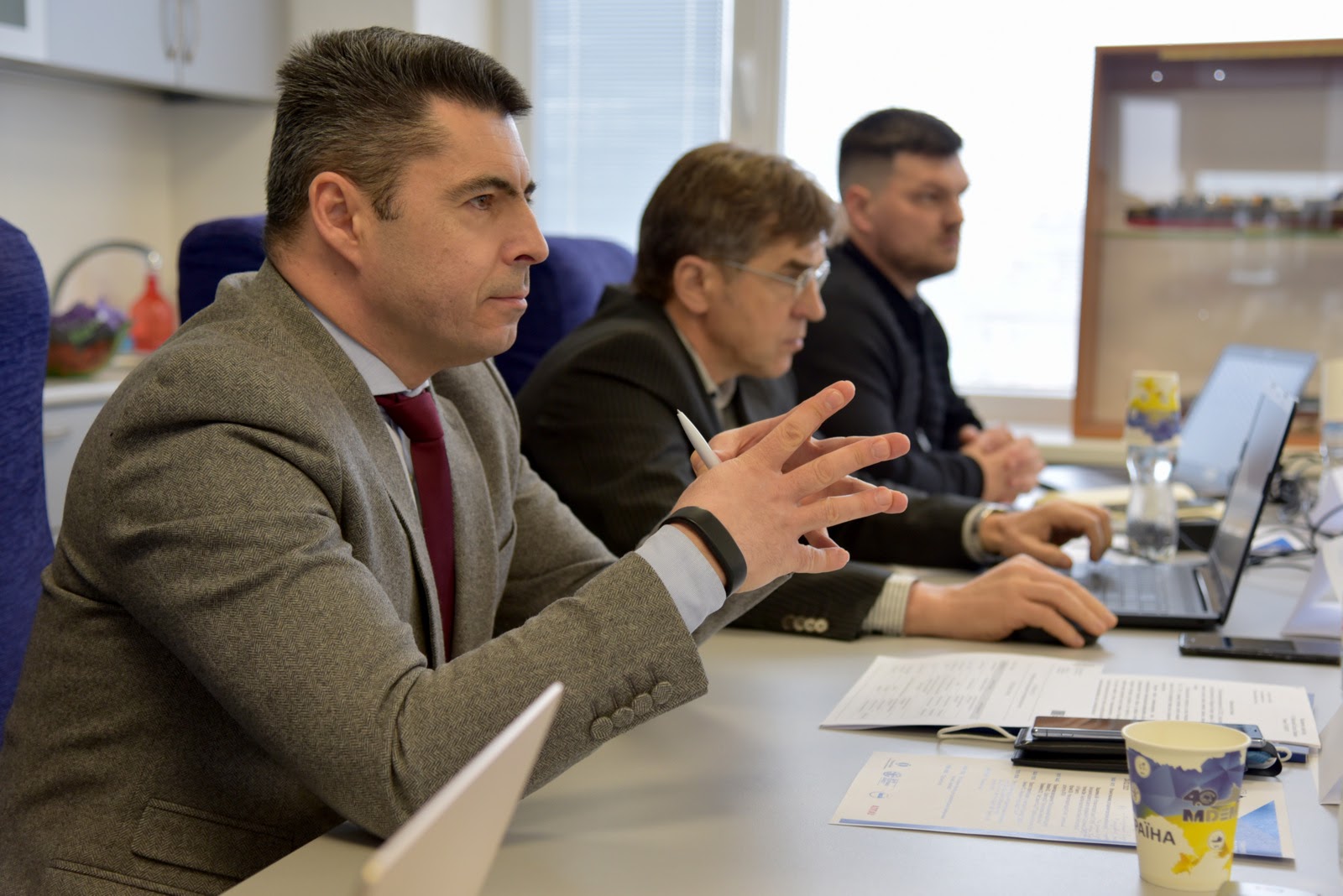 One of the key reports of the participants was the presentation of the director of Ukrpromzovnishekspertyza Volodymyr Vlasiuk – a research of the company on the state of the maritime industry of Ukraine. The aim of the study was to review of 4 key sectors of the national maritime sector (ship design, shipbuilding and ship repair, shipping, sea and river ports) in 2010-2019 and assess the prerequisites for the formation of sectoral (sectoral) clusters and intersectoral maritime cluster in Ukraine. The speaker emphasized the crucial role of shipping as a potential driver of the industry. 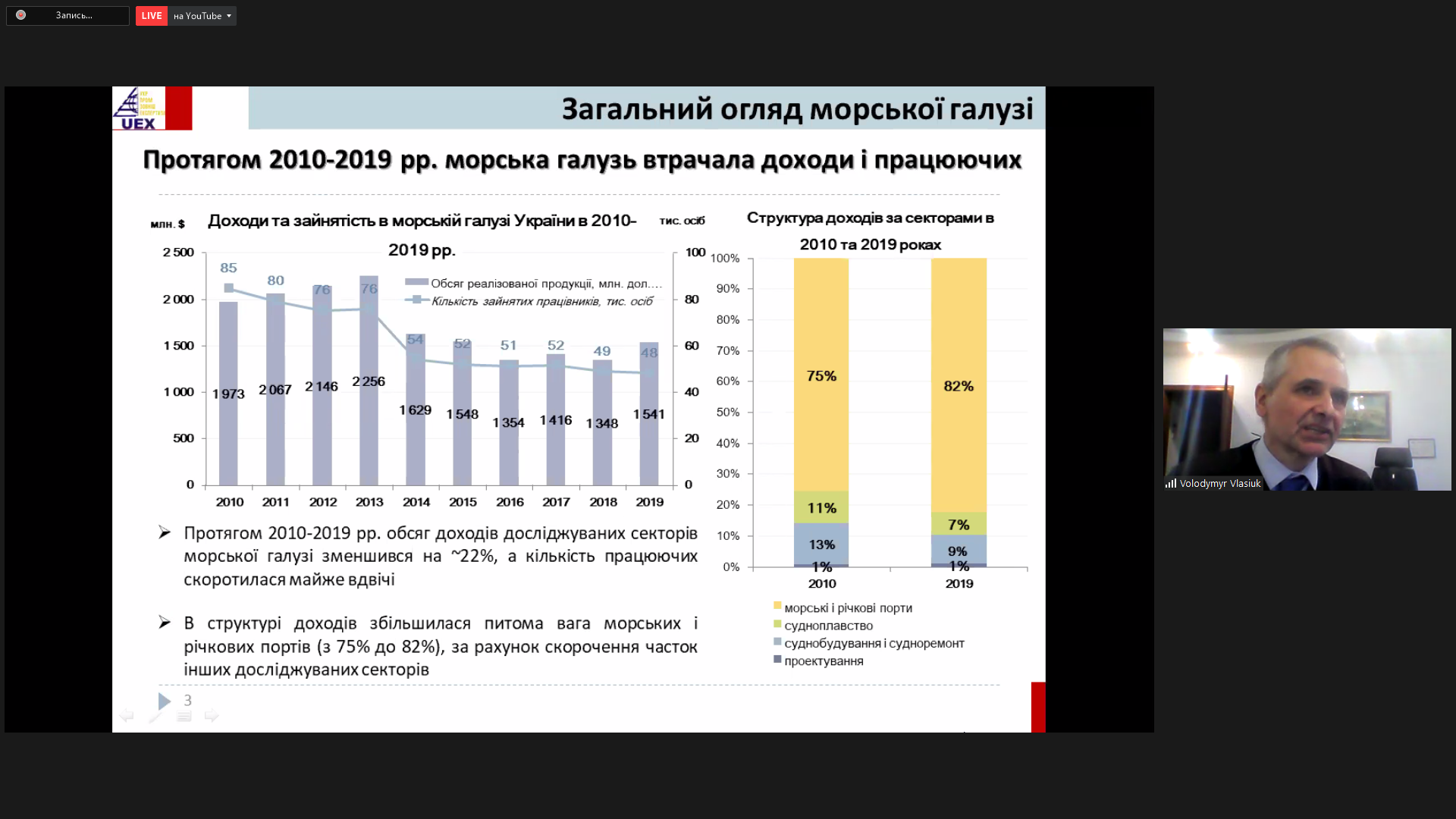 UMC Director Roman Khanzhyn outlined the state of the cluster development, activities in the first year, the main expectations of stakeholders and the potential composition of the cluster, as well as its renewed mission: economic potential growth of the maritime industry of Ukraine through the growth of  competitiveness and the development of sectoral innovation ecosystem, which contributes to the development of industry sectors and related to them. The described basic elements that form the cluster’s value proposition – Smart Products & Services, Smart Organization and Smart Export are noteworthy and bring the UMC strategic principles closer to the general ideology of IAM clusters. 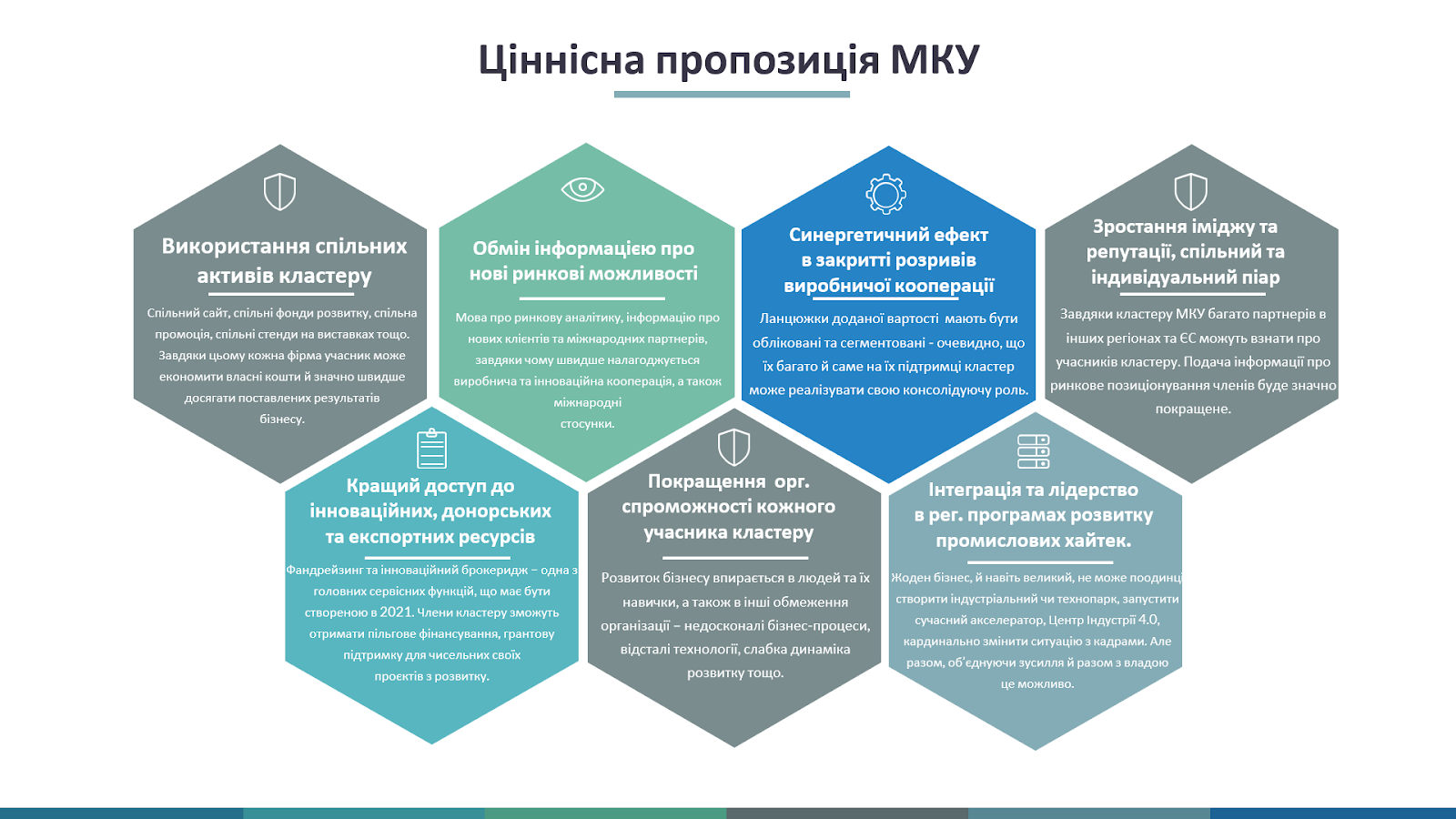 Oleksandr Yurchak, member of the UMC Supervisory Board, stressed that today, for the effective development of innovative ecosystems of the regions (Zaporizhzhya, Kyiv, Kharkiv, Mykolaiv), the list of target sectors by industries of the economy (ones the regions choose as the field of smart specialization) should be coordinated with specific investment and innovation development projects, provided with existing mechanisms and tools of support from the authorities. Currently, none of the regions meets all the necessary conditions at the same time, but thanks to the latest strategic sessions, Mykolaiv is ahead with motivated teams of performers and identified development projects. Also, the UMC was the first cluster in Ukraine in the creation a full package of regional development proposals for negotiations with international partners and donors, as well as local authorities. Oleksandr Yurchak stressed the importance of understanding the threatening trends in the country and its environment and the need to focus on areas of influence that best counter the threats of deindustrialization and loss of personnel, and strengthen collective capacity. 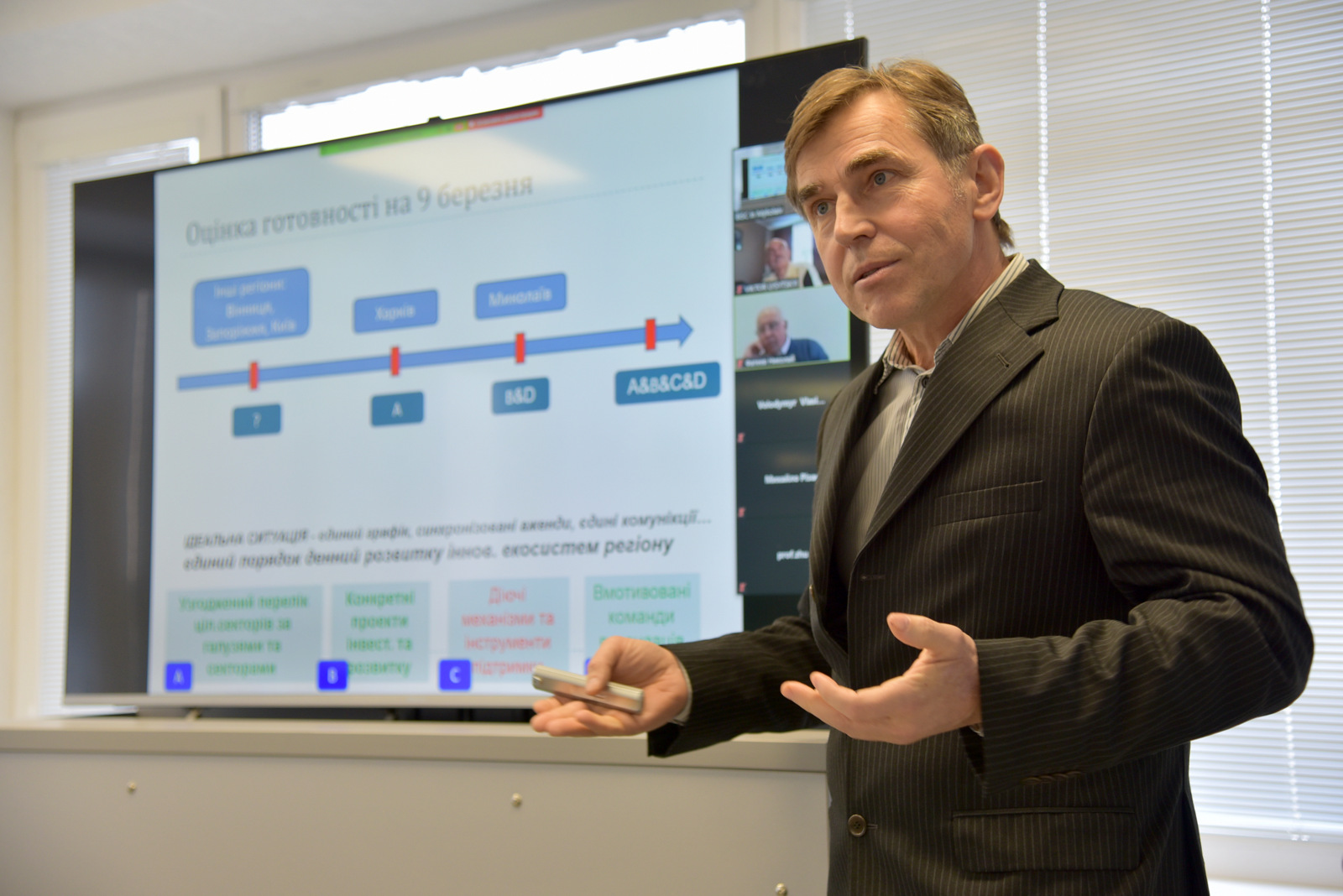 From more than 70 proposed projects at the first session, the cluster participants chose 16 key ones that will become the foundation of the UMC activities. The lion’s share is made up of initiatives to develop the innovative ecosystem of industrial high-tech, including support for the UMC cluster, Center 4.0 on the basis of NUOS, the creation of a regional landscape, the maritime marketplace, technology park and more.

Important aspects of the meeting were problematic issues of regulatory policy with its weakness of making it impossible to promote Ukrainian shipbuilding (the positive point is the support of the cluster by Ukrsudprom and the Ministry of Strategic Industries of Ukraine) and integration with local authorities (scheduled for further discussion on March 9).

Volodymyr Vlasiuk, Director of Ukrapromzovnishekspertyza, and Serhii Povazhniuk, Deputy Director, stressed that the driver of the maritime cluster in Ukraine formation is the development of Ukrainian cargo transportation by domestic shipping companies, which is possible under a strong policy of stimulating the production of serious industrial products and the integration of shipping companies for the real development of the maritime industry.

Ihor Lysytskyi, Head of the Digital Infrastructure Development Department at the Ministry of Strategic Industries of Ukraine, said that given the global trend of declining shipbuilding, the revival of Ukrainian shipbuilding is possible with the greatest assistance.

Mykhailo Rizak, Nibulon Deputy General Director of Government Relations, confirmed that the company, confirmed that the company as a leader in inland waterway investment, also aims to build Ukraine as a maritime state, but not a seaside state, and that is why it is critical of the latest legislative changes in the regulation of inland waterway transport. He paid special attention to the problems of the bunkering market in seaports. The following awareness is surprisingly important: the current situation needs to change, as it threatens the disappearance of state shipbuilding, so it is necessary to turn to programmed state instruments, such as the Concept of the National Program for Adaptation of Ukrainian Legislation to European Union Legislation, which is currently ignored. The cluster can be a driver and a powerful force in implementing changes in this aspect and European integration policy. 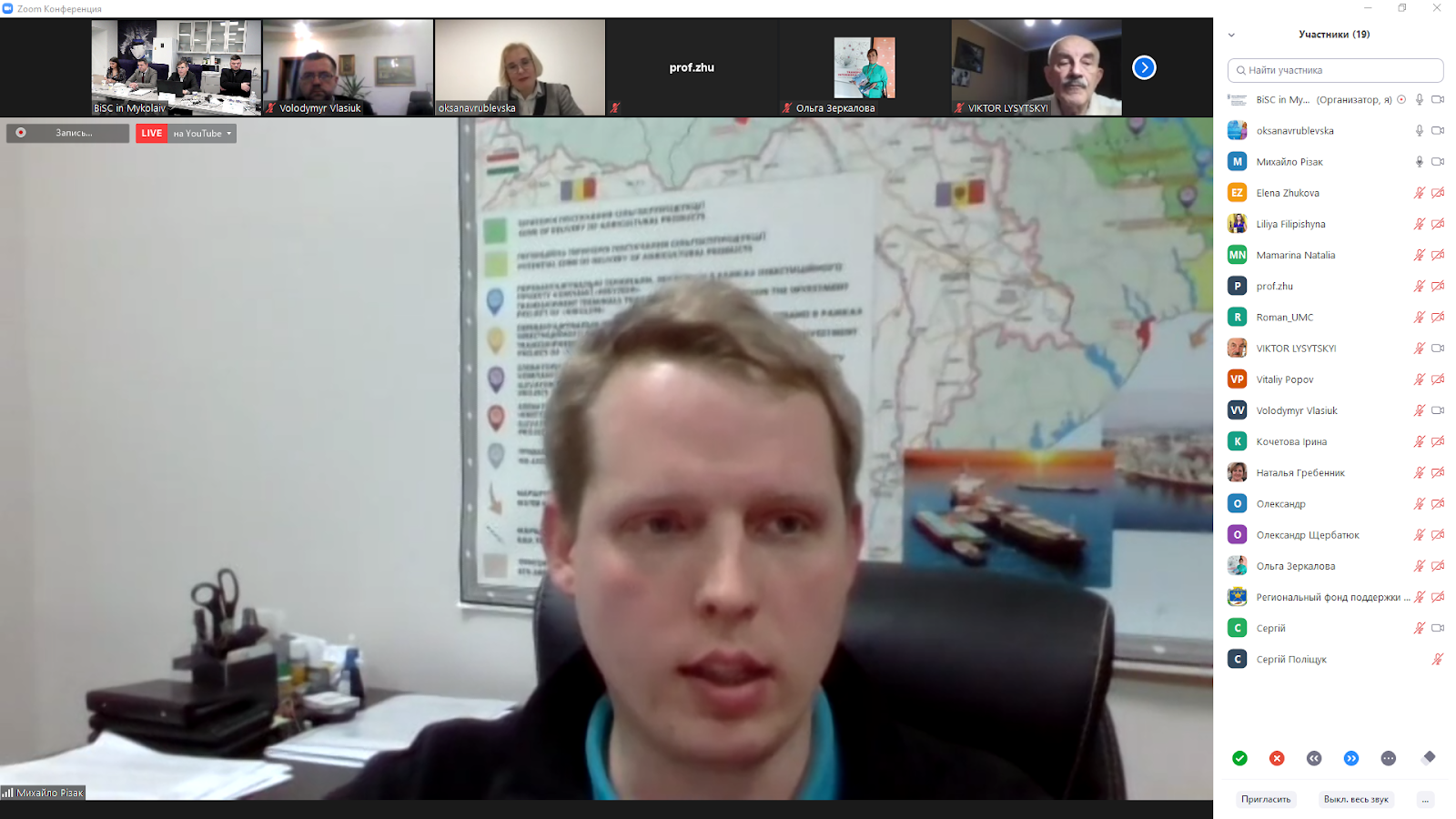 Serhii Pokui raised a question of development of the project of technopark on the basis of the operating enterprise – the Mykolaiv Lubricating and Filtering Equipment Plant. It should be noted that this proposal is among the UMC projects and needs further discussion. 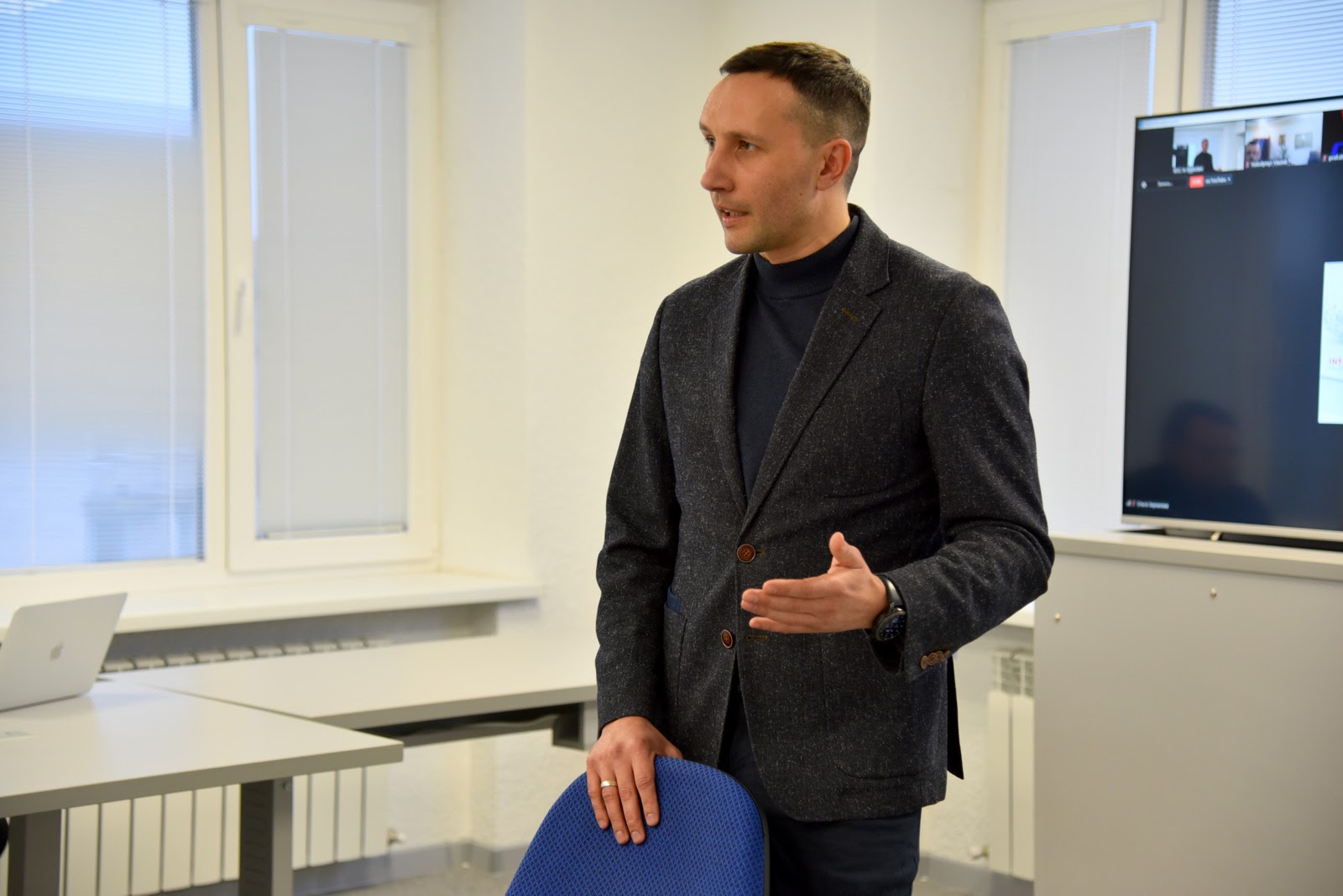 Vice-rector for scientific-pedagogical, administrative work and development of NUOS Eduard Khachaturov noted a positive result in the agreements reached through the UMC on cooperation in training, because it is impossible to pursue professional fields without understanding their essence.

Volodymyr Parsyak, Dean of the Faculty of Maritime Economics at NUOS, pointed out that the main task today is to support selected initiatives and attract additional sources  for their implementation, as well as to demonstrate opportunities for companies to participate in international cooperation in maritime activities. 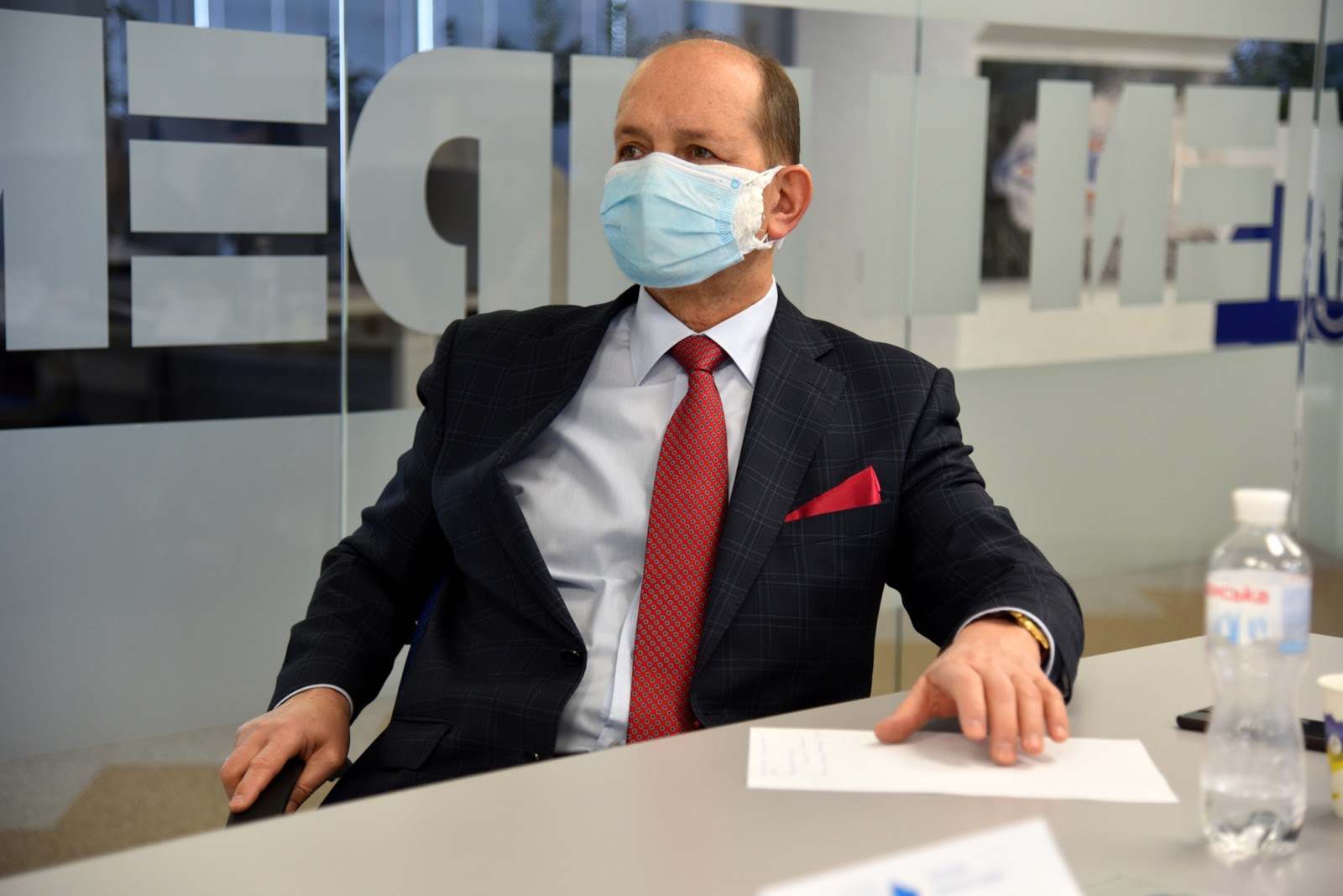 Yurii Zhukov noted that only consolidation, mutual information are the way to achieve the UMC goals, it is important to set tasks that meet the national, regional and global challenges. The success of the business undoubtedly depends on the people in the workplace, in understanding whether they are ready to learn, change, and transform professionally. 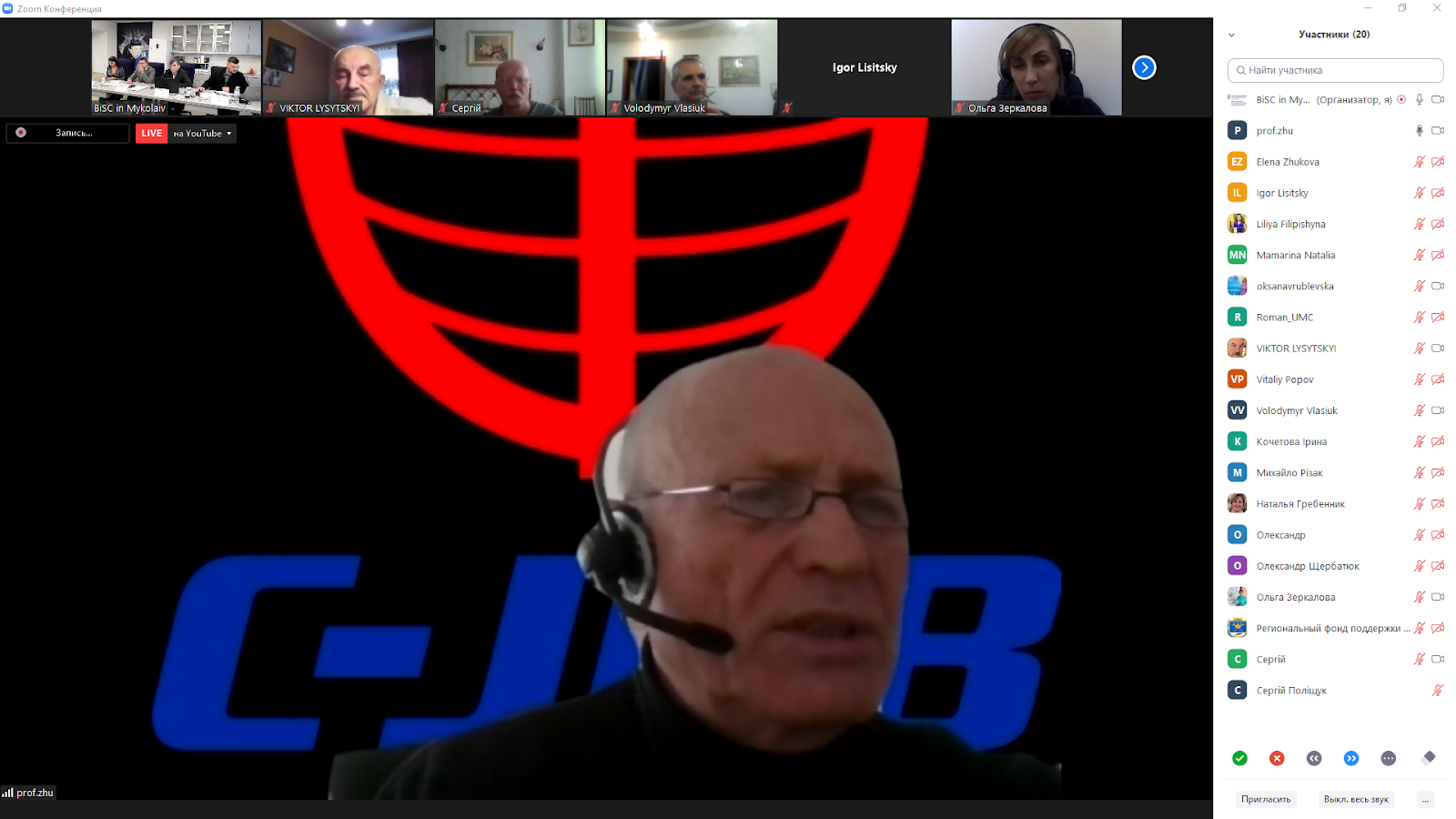 Stanislav Seleznov, Head of Engineering Services, Marine Design Engineering Mykolaiv LLC (MDEM), noted that a significant achievement is that the UMC is  the growing and constantly developing information field and agreed with Yurii Zhukov, that all identified projects are equally important and it is worth using all the opportunities for the development of the cluster in different directions. 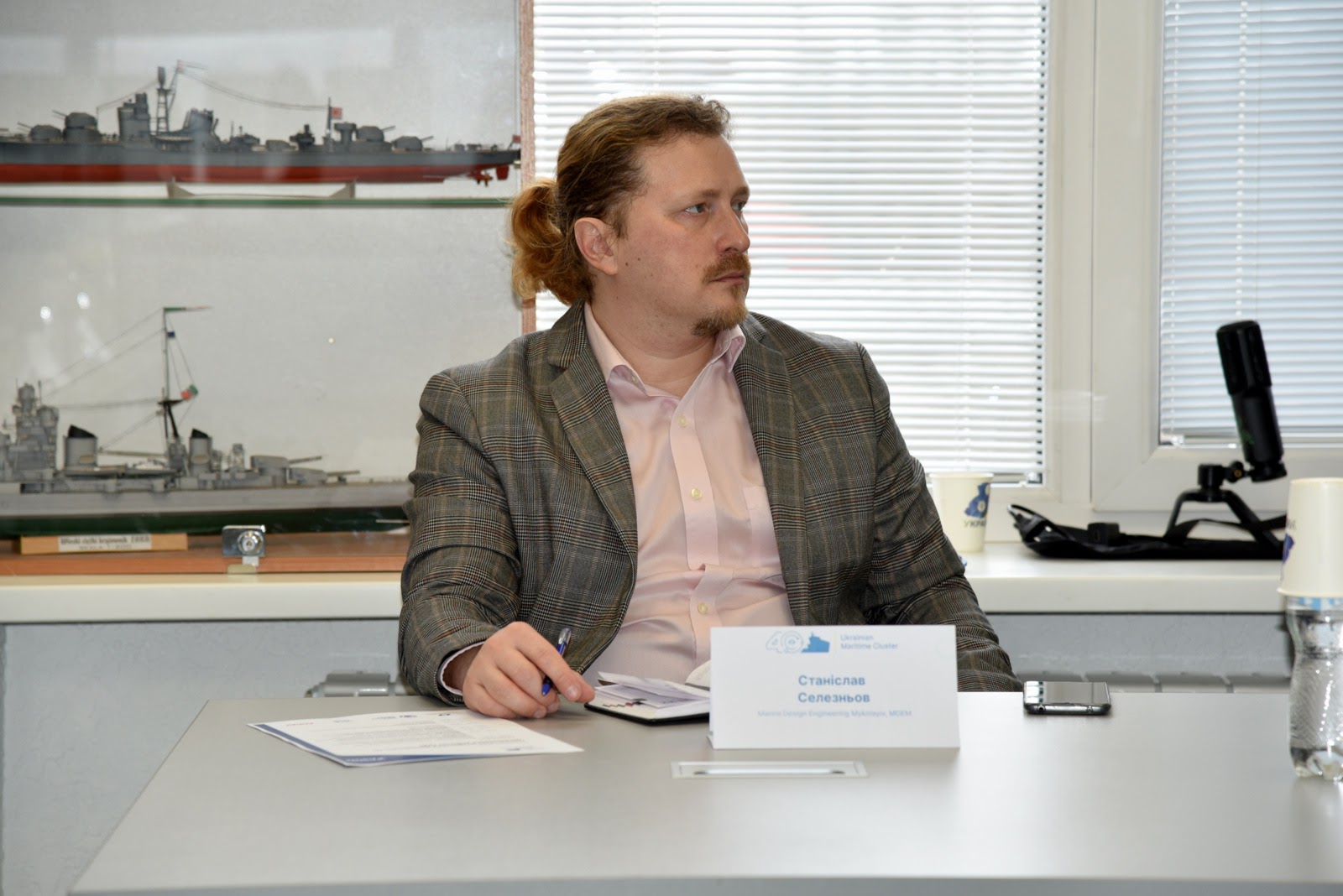 Stanislav Tovshchyn, a representative of the Kherson District Council, added that Kherson has a number of strong enterprises and an educational base for the development of the maritime industry, so the city will make significant efforts to join the UMC in the future. 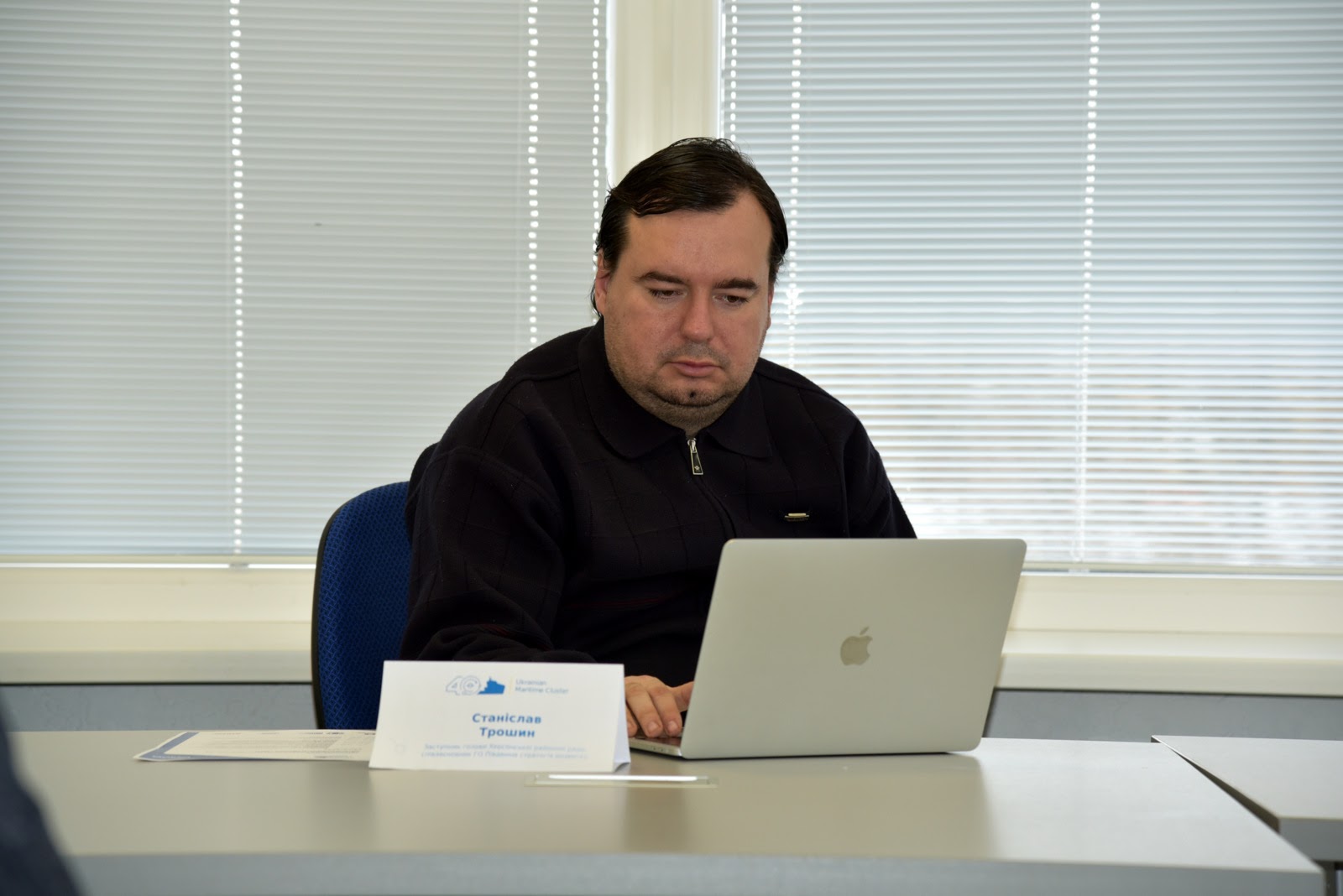 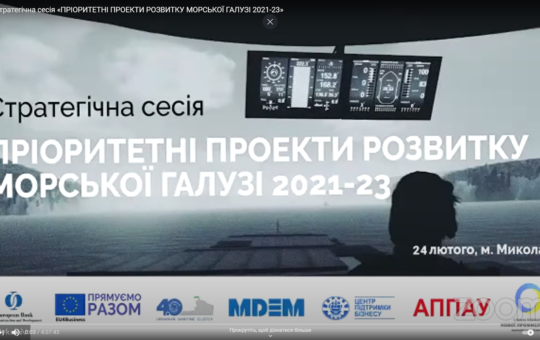 https://maritimeukraine.com/event/final-proektu-intehratsiya-4-0-v-mykolayevi/There was an online broadcast on YouTube during the session, which can be viewed on the Business Support Center page.

The second strategic session became the final stage before the final of the national project “Integration 4.0” within activities of the European industrial days under the organization of the European Commission which will take place on March 9 in Mykolaiv. Prior to that, it is very important to coordinate the developed plans with the executive authorities and local governments.

Materials of the meetin