European Industry Days 2021. The achievements of the Integration 4.0 project presented to the international maritime community.

On March 9 the final of the national project “Integration 4.0” within EU Industry Days took place in Mykolaiv on the basis of the MDEM.

The online event brought together five regions of Ukraine (Kyiv, Vinnytsia, Zaporizhia, Mykolaiv, Kharkiv), joined by more than 80 participants from Ukraine and Europe, who had the opportunity to spread their own and adopt a successful clustering experience, get to know about target segments of smart specialization and cluster support tools.


Ukraine is participating in EU Industry Days for the third time. This time, participants had a task to prepare recommendations that will be included in the formation of the final report – a guide for the European Commission: what is happening in the field of industrial policy, what really works and what needs to be verified. Participation in the initiative is a powerful tool for positioning the state on the European industrial map for clusters – to find partners and to become involved into European platforms and value chains formation.

The first panel of the session was dedicated to the presentation of the project “Integration 4.0″results, which was opened by Oleksandr Yurchak , project manager, CEO of APPAU. He started with the history of the project “Integration 4.0.”, describing the Ukrainian context. According to him, Mykolaiv is hosting the final, because exactly there in fact during the one month an integration of measures for additional financing of the EBRD project was realized, a campaign was conducted, which currently remains to be agreed with the authorities. “We have the following results at the output: ready methodology of adaptation and smart specialization – “Ukrainian ready version of EDP”, teams of innovation clusters, ready for integration into regional plans, and clear directions for alignment with the EU – portfolios of top regional industrial high-tech projects, tools “basic package of innovation development”. These results are more systematized and reflected in detail in the Analytical Report “Better Cooperation between Government, Business, Science and Education in Response to the Challenge of Deindustrialization”. Oleksandr Yurchak thanked the teams of the Institute of Economics and Forecasting of NAS of Ukraine, Vinnytsia Instrument-Making Cluster, Maritime Cluster of Ukraine (Mykolaiv), Zaporizhzhya IAM Cluster, Kharkiv IAM Cluster, Kyiv Hi-Tech Initiative and donors – GIZ, UNDP, EBRD. 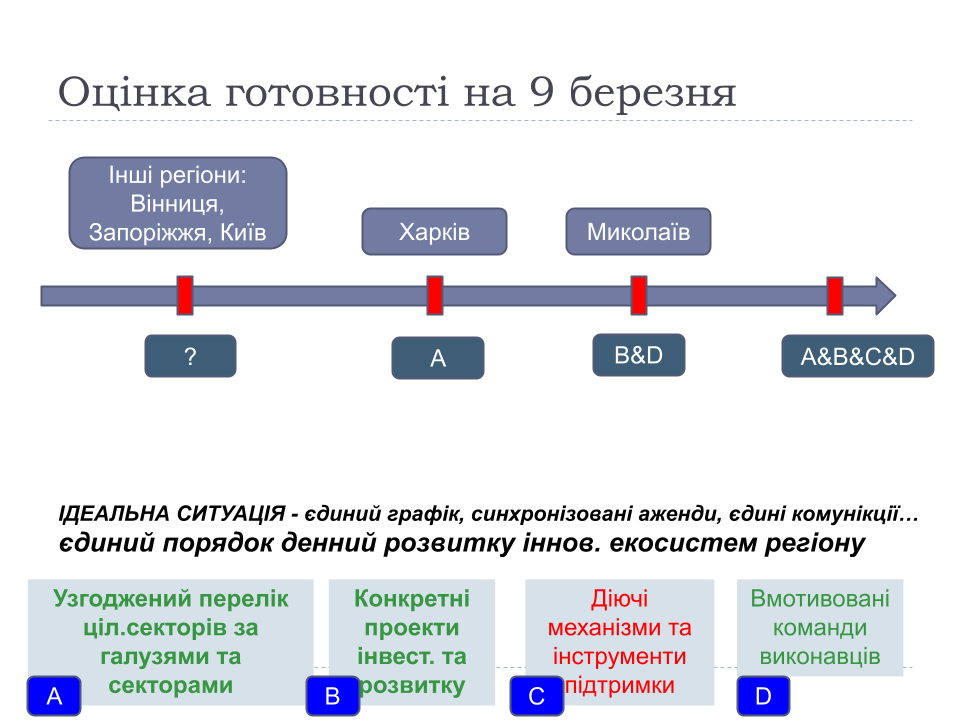 Artem Vashchylenko, Head of the Business Support Center in Mykolaiv, noted that the process of consolidating the Maritime Cluster community lasted 2 years – from 2018, when the first European Maritime Day took place, and this year Mykolaiv will host the event for the third time, recognizing the importance integration with the European community, communication with the maritime regions of Europe. This form of consolidation led to the creation and institutionalization of the Maritime Cluster of Ukraine.

Olena Zhukova, Managing Director of MDEM, told about the company in the context of the national policy of interaction between government, science and business: milestones of development, range of services, experience of integration and networking of MDEM. She paid special attention to the challenges that stand in the way of integration, urging everyone to unite and literally “let’s deal with the complexity together.” 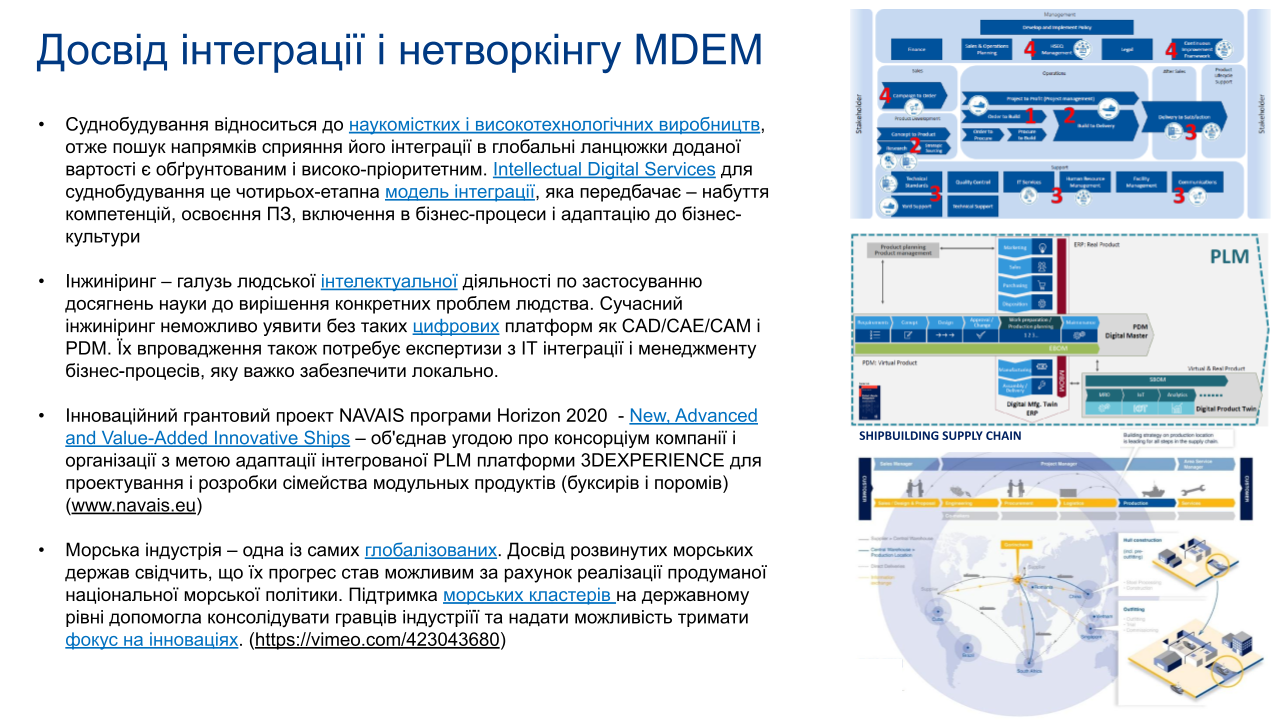 Roman Khanzhyn, Director of the UMC, thanked the cluster members and partners for their contribution to the common cause and told how the Сluster formed and processed the request from the enterprises of the maritime complex of Ukraine, how the development of priority projects took place. A strong result for the cluster is the definition of an action plan for the coming year, a request and specific projects in which it will participate over the next two years. UMC Director also outlined the main expectations of stakeholders, including representing the industry in the international arena, developing educational, innovation infrastructure, promoting the industry, lobbying and attracting investment, as well as the value proposition of the cluster. 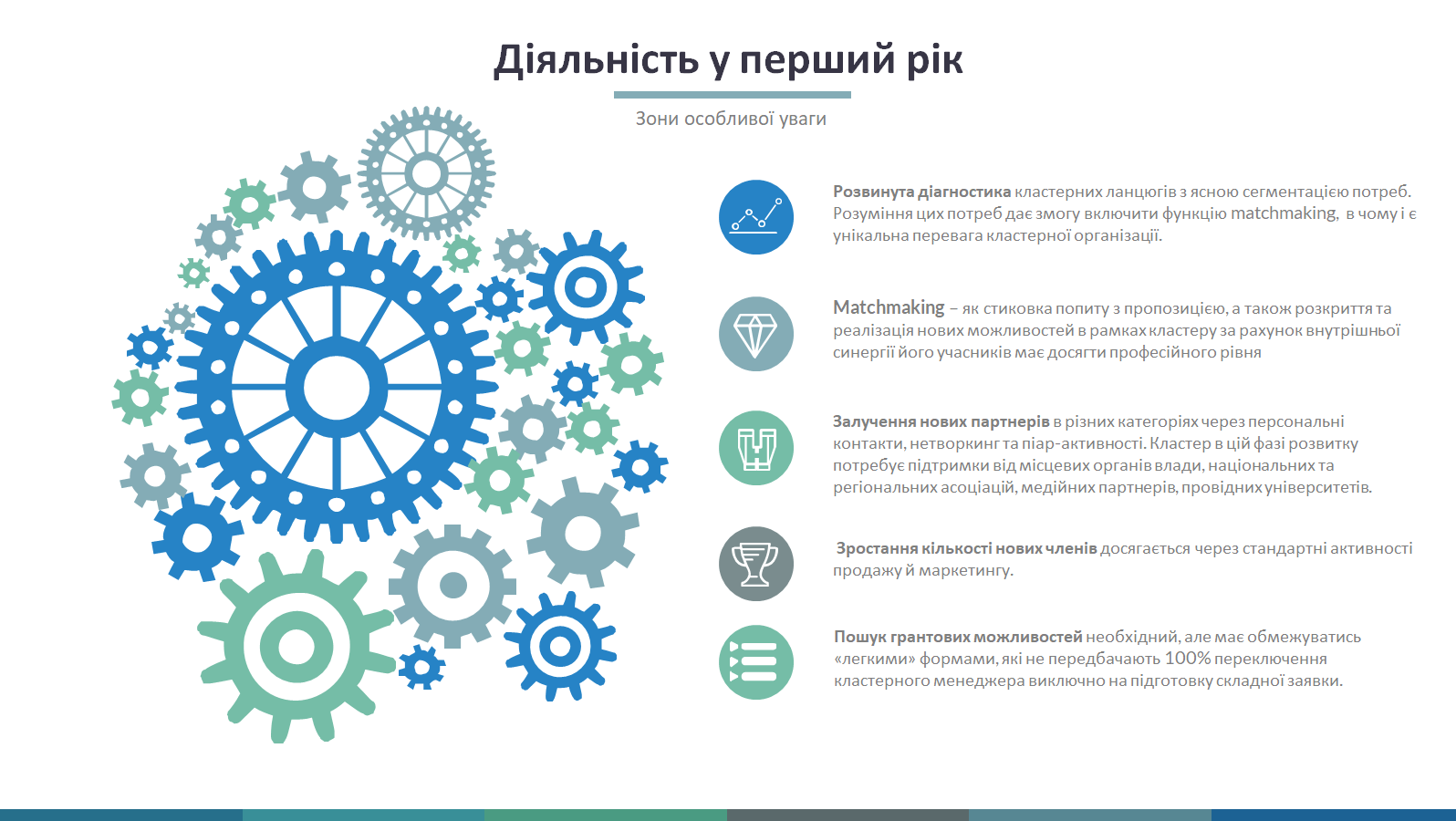 Then the floor was given to representatives of the Vinnytsia Instrument Сluster Yuriy Klymenko and Nadiya Karplyuk , who told about tools to keep the focus on industrial high-tech, analyzing three processes: the evolution of approaches to creating a regional system of innovation, countering the main challenges of regional development and the response to them by stakeholders and the mechanism for implementing the Industry 4.0 in the regional innovation ecosystem. Yuriy Klymenko also told about the cluster’s promising projects – a multifunctional service network for the use of unmanned systems and a dynamic wind-penetrating solar power plant. 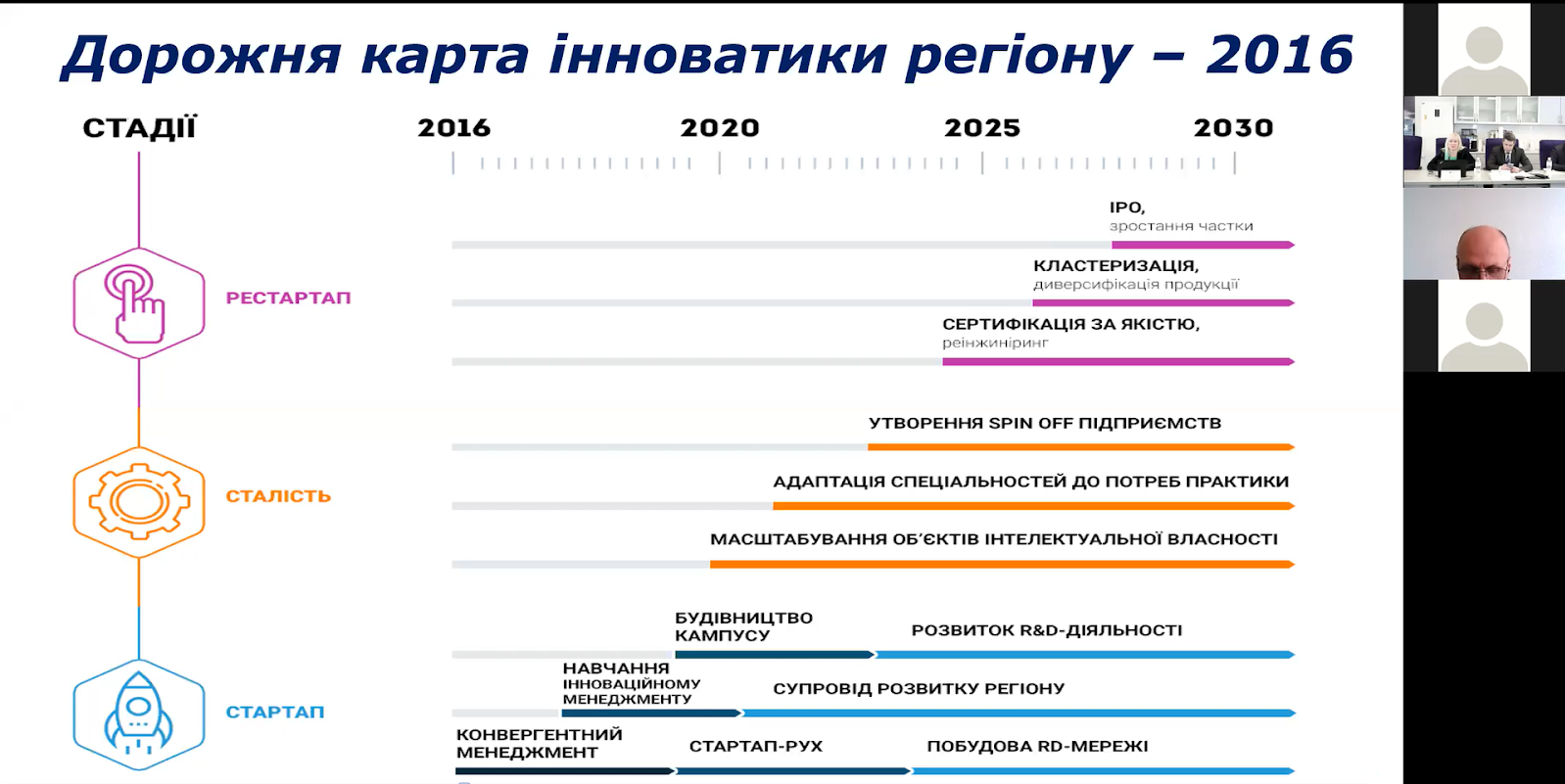 Anatoliy Dolynny from the Kyiv High-Tech Cluster and Olga Sokolova from the Kyiv Regional State Administration told about the project of regional development of the Kyiv region and instruments of public-private partnership. Anatoliy Dolynny acquainted the audience with the possible directions of the Cluster’s work in the region.

The second panel of the session was opened by Oleksandr Yurchak, who outlined in more detail about the Ukrainian version of EDP, and also invited to the Industry4Ukraine platform, where everyone can get acquainted with analytical publications and discover important insights.

During the discussion between Yulia Ryzhova, Oleksandr Yurchak and Artem Vashchylenko, it was found out that in the approved SSRR for the period 2021-2027 in a number of regional administrations excluded traditional industrial high-tech. It was surprising that in 2019 European experts at seminars on definition of smart specialization noted that development of the maritime industry is not a smart specialization for the Mykolaiv region. According to Artem Vashchylenko, at the time of making this decision there was a break in communication, the lack of vision of local governments as a whole picture of the region’s economy. The problem of industrialists’ distrust of regional authorities – tools, efficiency, competencies – is also mentioned, so the UMC will make efforts to overcome this distrust, to level the development between the real demands of maritime enterprises by what the government plans to broadcast outside on behalf of the region. And this meeting is an optimistic signal to establish communications.

Dmytro Krankovsky told about the experience of the Mykolaiv Innovation Cluster RInnoHub, its projects, priorities and development plans. The speaker assured that today the authorities have begun to take certain steps to understand what exactly interests entrepreneurs and how to overcome distrust of the government.

Oleksandr Yurchak summed up that currently cluster instruments are mostly limited to foreign donations, instead of funding through regional programs. In this context Nazar Podolchak, Head of Tech StartUp School, Head of the Department of Administrative and Financial Management, Lviv Polytechnic told about experience of Lviv, where cooperation with the city authorities is not limited by promises and declarations, but has many practical dimensions in the report “Projects and promising areas of Tech Startup Schools”. The speaker outlined unique innovative projects and partnership experience of the School. 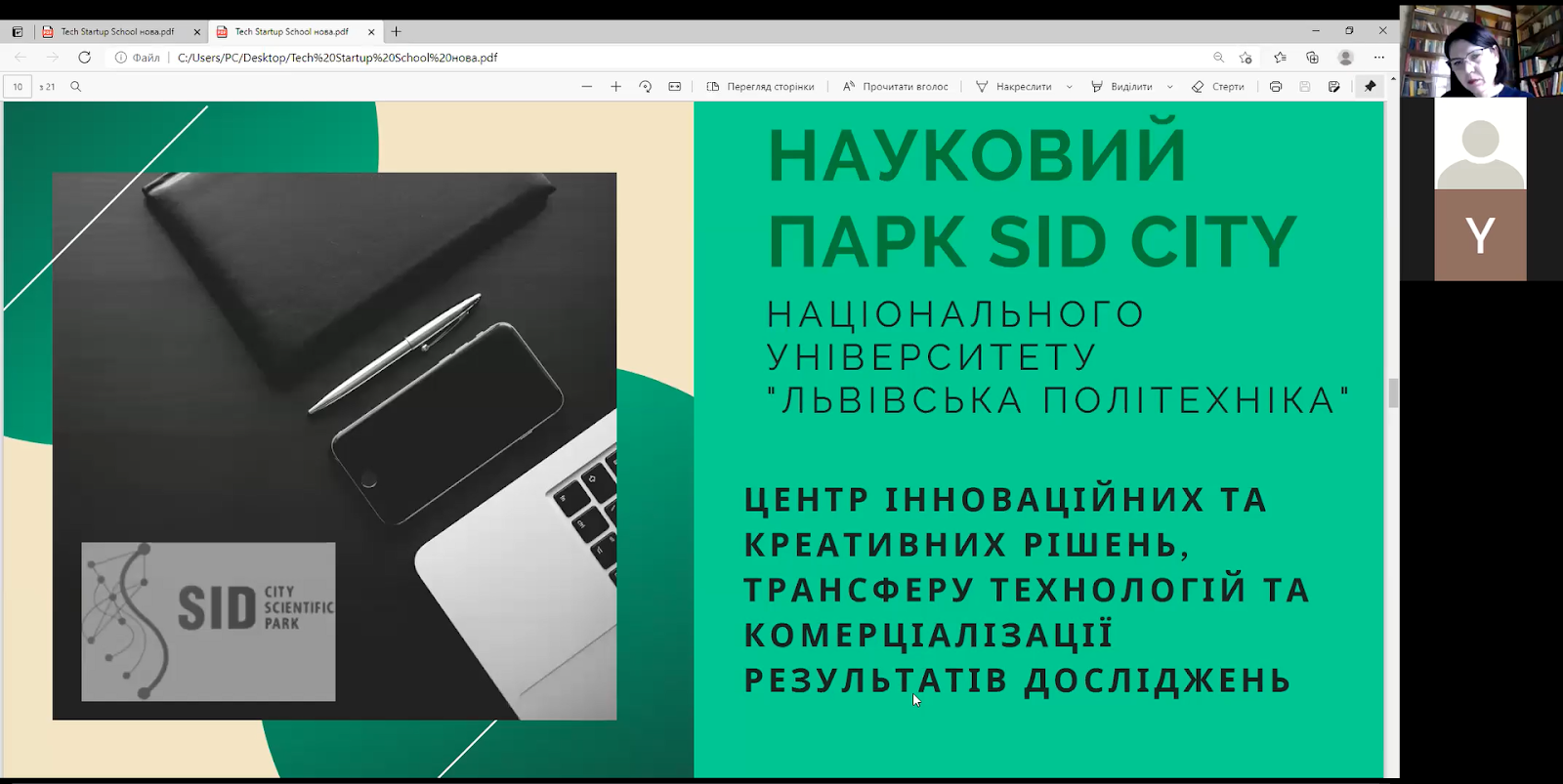 Andriy Karpenko , Head of the IAM clusters in Zaporizhzhya and representative of the National University “Zaporizhzhya Polytechnic”, in turn, told how Zaporizhzhya is developing its innovative format through clusters. The topics of his report were Technology&Innovation day – as a tool for the innovation ecosystem of the region diagnosis and development of, as well as the experience of Zaporizhzhya in the first in Ukraine T&I day.

The final speech of the session was the report of Yuriy Zhukov, Doctor of Technical Sciences, Professor, Chairman on Board, C-Job Nikolaev LLC. The speaker described the current trends in shipbuilding, the challenges that affect mostly on the transformation and further development of the shipbuilding industry, and set the record straight in the issues of UMC stakeholders as follows:

At the end of the session, Roman Khanzhyn and Artem Vashchylenko answered questions from foreign participants about the tools that the UMC plans to use for strengthening international cooperation. According to them, these include: creation of promotional materials that will reflect the strengths of the cluster member companies; participation in international exhibitions of the maritime industry (SMM digital, Europort, etc.); decisive steps aimed at returning shipbuilding exhibitions to Mykolaiv and creating a platform in this city for communication with international panthers; participation in joint projects; maximize the use of instruments provided by the agreement with the EU – instruments of European programs, the EBRD, Horizon, the platform of the European Maritime Days and other measures to build the capacity of the Maritime Cluster and the economy of southern Ukraine. 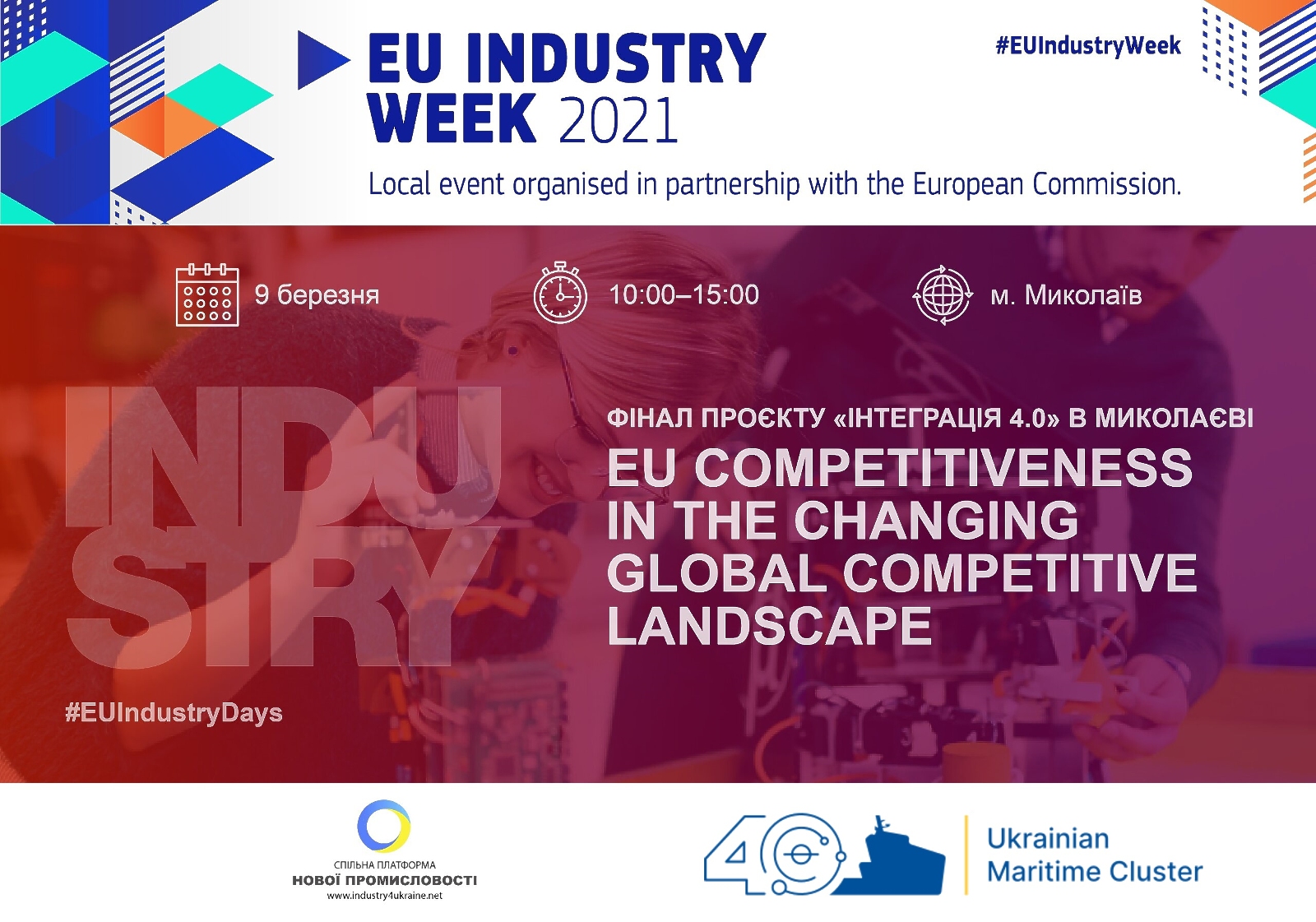