On February 3, the strategic session of the Maritime Cluster of Ukraine (UMC) “Priority projects for the development of the maritime industry 2021-23” took place.

The event was organized with the support of the European Bank for Reconstruction and Development within the project of strengthening the institutional capacity of the Maritime Cluster of Ukraine.

Today, the priority is to determine specific plans for the cluster. In the introduction to the event, the director of the UMC Roman Khanzhyn outlined the stages passed since the Cluster formation, the goals and sequence of solving problems to achieve them.

It was determined on the session that the main purpose of the UMC is to unite efforts to better represent the shipbuilding and maritime industries of Ukraine potential on the international market. The participants are ready to solve problems that prevent this.

It was planned to present enterprises of the cluster at international exhibitions (SMM, etc.) and to hold events promoting engineering education, to introduce programs for the integration of education, research and production.

European Bank for Reconstruction and Development Analyst Julia Ityhina made the greeting line. The EBRD, as a partner of the Maritime Cluster of Ukraine, considers cluster initiatives to be the most effective form of economic growth and sectoral development. They are ready to provide support in the early stages of institutional support for the Cluster. 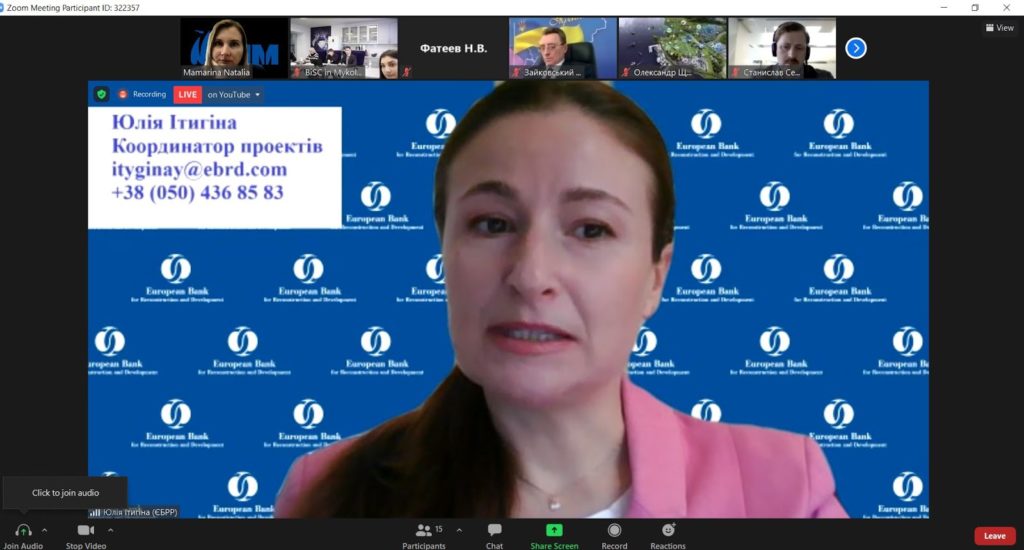 Artem Vashchylenko, founder of the Business Support Center and Chairman of the Supervisory Board of the Maritime Cluster of Ukraine, announced that the European Bank has financed a series of measures to identify priority projects for the industry and an expert study “Review of the Maritime Industry of Ukraine” by Ukrainian Industry Expertise. It will be analyzed in this study the volume of production / transshipment / transportation in quantitative and cost terms, the importance of the sector for the economy of Ukraine, the total number of companies, major players working in the sector and promising areas of development of the sectors.

Artem Vashchylenko also noted that the initiative group of the Maritime Cluster of Ukraine understands the prospects for the development of the Cluster, and therefore initiated systemic changes in the business environment of the city and the country. The cluster approach ensures a coherent industrial and innovation policy, integration of regional value chains into international production networks and further integration with the EU. The cluster is moving towards the European and international cluster community, which will also provide financial and technical support under the EU’s neighborhood program. 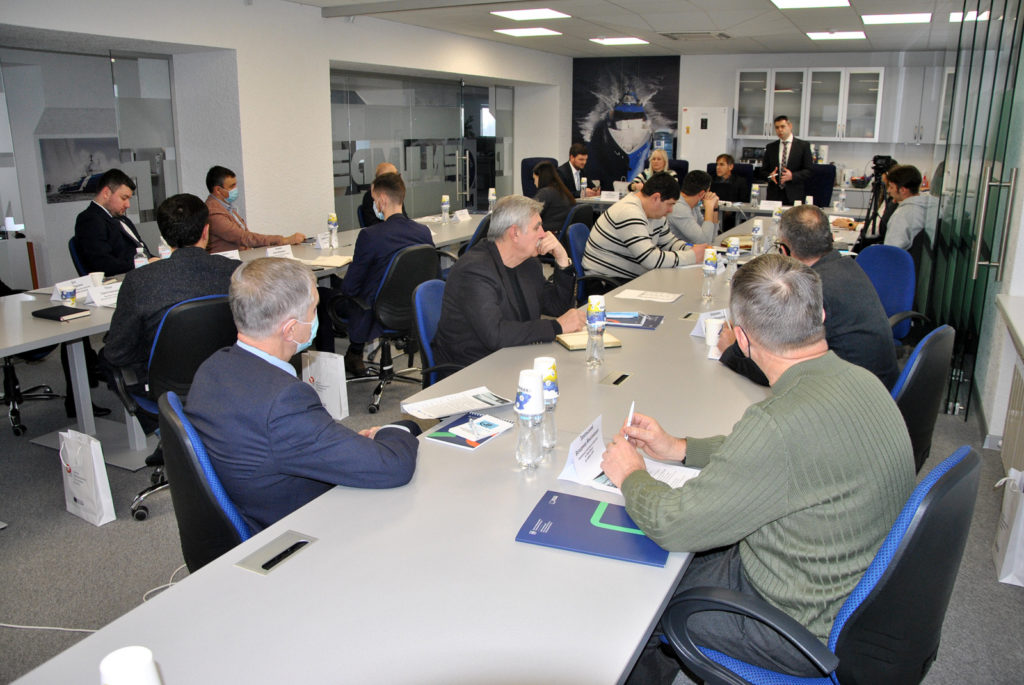 Also the director of department of economic development of the Mykolaiv Сity Сouncil Tatyana Shulichenko greeted participants of session. She reminded of the existing support from her team in the Сity Сouncil and stressed the importance of the initiatives of the Maritime Cluster for the development of Mykolayiv and all regions of southern Ukraine. Here enterprises of all segments of the maritime complex locates.

The session was moderated by Oleksandr Yurchak, General Director of the Association of Industrial Automation of Ukraine (APPAU) and a member of the UMC Supervisory Board. He also manages the Integration 4.0 project, which the UMC joined in October last year. The aim of the project is to integrate two approaches to regional development: clustering and smart specialization.

According to the plan of this project, on March 9  the conference within  the European industrial days organized by the European Commission will take place in Mykolaiv. Oleksandr presented to the participants the developed projects of APPAU, some of which have already been implemented in other regions and which are easily scalable for the needs of the maritime industry of Ukraine.

UMC is already developing on the model of clusters IAM (Engineering, Automation, Mechanical Engineering), which was developed by APPAU, and has the opportunity to use developments in Centers 4.0, Maps of digital transformation, regional innovation landscapes, adapting them to the needs of the industry. 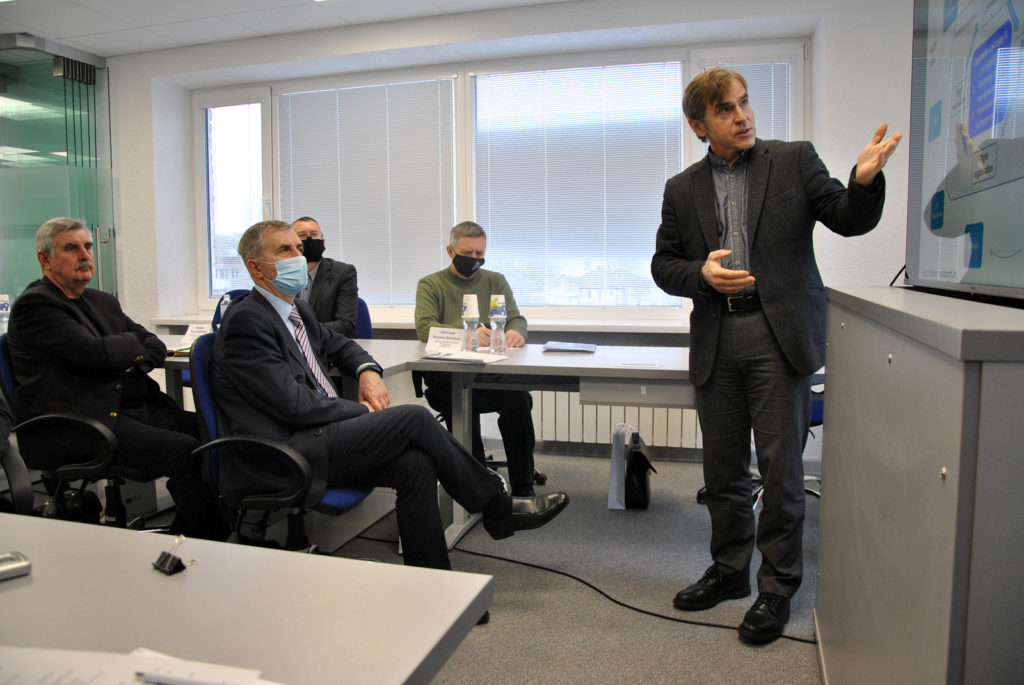 Deputy Director of the Department of Architecture and Urban Planning Yevhen Polyakov told about how the Mykolayiv City Council approves general plan of the city and about the procedures for landscaping,  river and estuary infrastructure development. 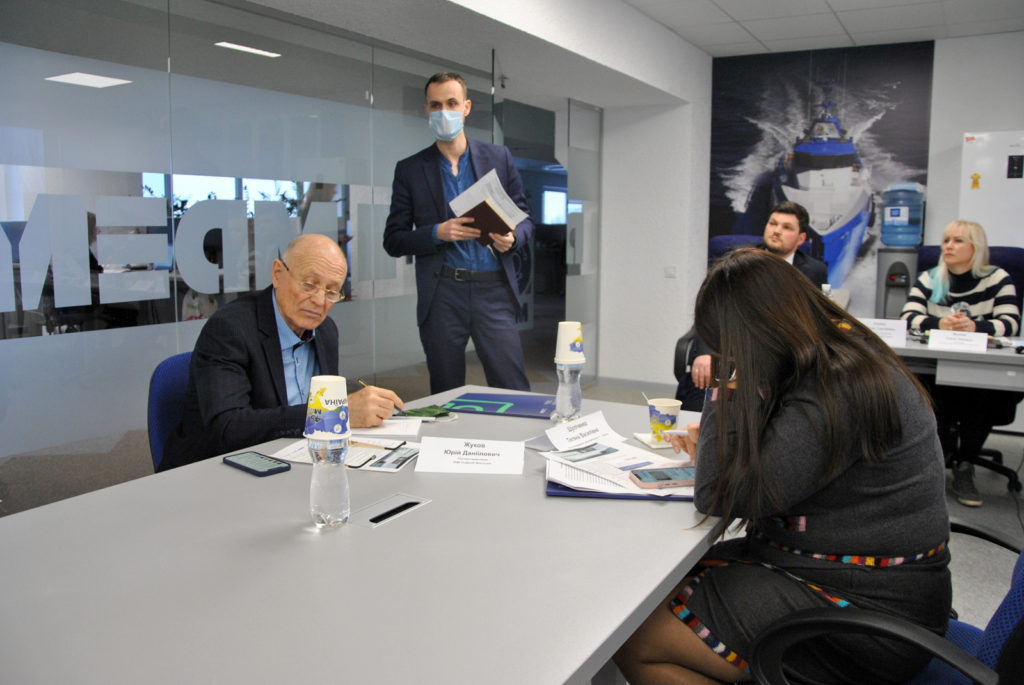 The Marketing Director of the Ocean Shipyard made the report on the company’s plans. He told about the plant’s participation in the program of building corvettes for the Ukrainian Navy, attracting orders for new buildings and vessel repair, modernization of shipyard equipment and the use of non-shipbuilding space for a logistics hub.

The Maritime Cluster of Ukraine in the plans of “Ocean” occupies a special place as one of the means of finding customers in the European market, as well as to attract contractors and partners in the implementation of the corvette program. 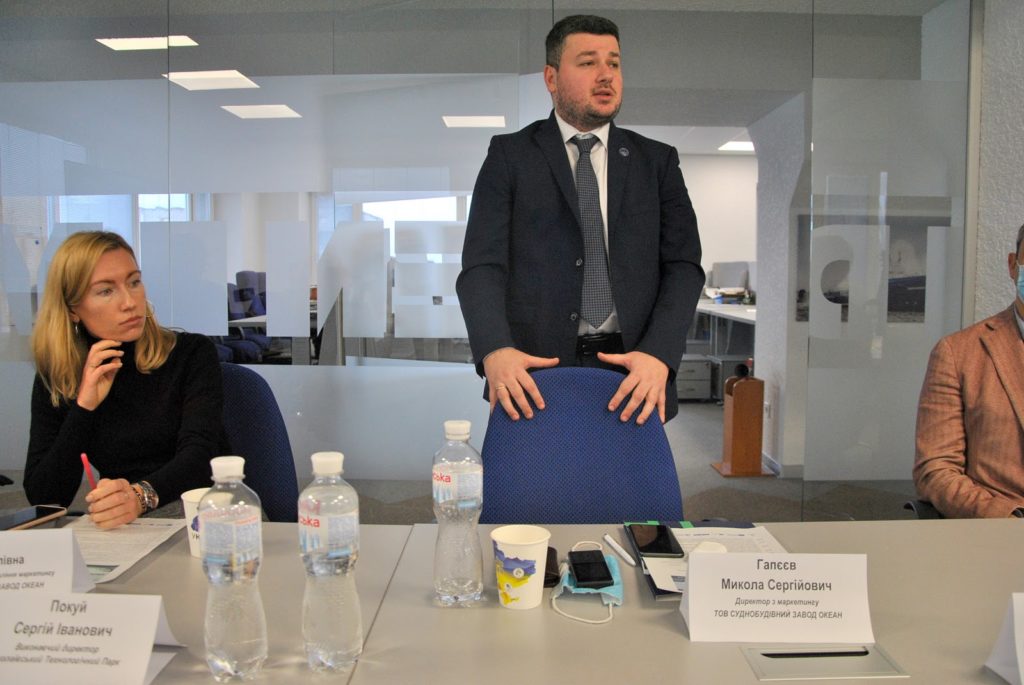 Volodymyr Koval, Vice President of the Association of Shipbuilders of Ukraine “Ukrsudprom” joined the session via video link. His speech was about the initiative to establish a technical committee “Ships and Marine Technology”, which was joined by the Ukrainian Maritime Cluster. The Committee is engaged in the adoption and implementation of new standards that should become the foundation of water transport in Ukraine and invites companies and organizations that share the values of these modern standards. 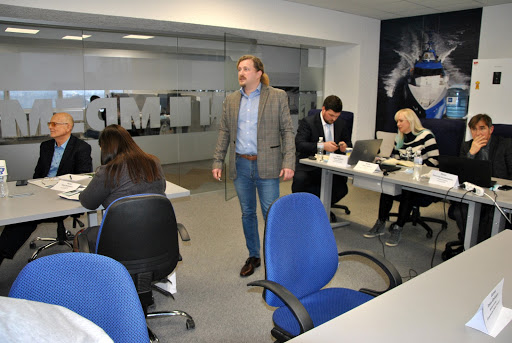 Stanislav Seleznov, Head of the Engineering Services Department of Marine Design Engineering Mykolaiv  (MDEM), told about Damen Shipyards Group’s innovations in the shipbuilding industry. MDEM is one of the UMC initiators and a division of the Damen Shipyards Group. Thus, the Ukrainian company is already a leader in the latest trends of the industry: creation of new types of vessels, use of electric and hybrid engines, transition to new fuels (methanol, ammonia, biodiesel, etc.), use of composite materials in shipbuilding, large data processing systems and etc.

MDEM is also participating in the international program NAVAIS, which aims to restore European world shipbuilding leadership. Therefore, the creation of the Ukrainian Maritime Cluster and its accession to European programs is of strategic importance for the whole country. 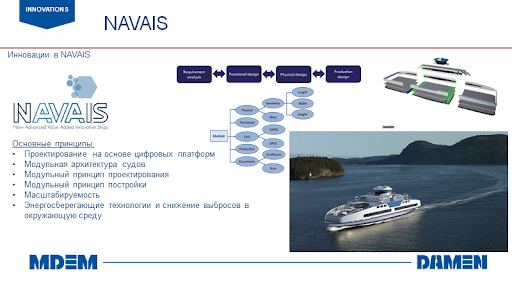 Continuing the topic of international development of Ukrainian innovations, Oleksandr Shcherbatiuk, General Director of the Kyiv company the “Hydrogen Systems Engineering”, told about the possibility of involving the UMC in cross-border cooperation projects. They can include research and policy development, offshore wind energy development and the production of green hydrogen and decarbonized motor fuels (green ammonia) in collaboration with research centers and other stakeholders from the EU’s Danube macro-region.

Serhii Pokui, Executive Director of the Mykolayiv Shipyard, initiated the creation of a modern training center for workers’ specialties and a branch center for R&D (Research and Development). The creation of an R&D center should provide a link between researchers and production, provide industrial enterprises with relatively cheap access to modern technologies. 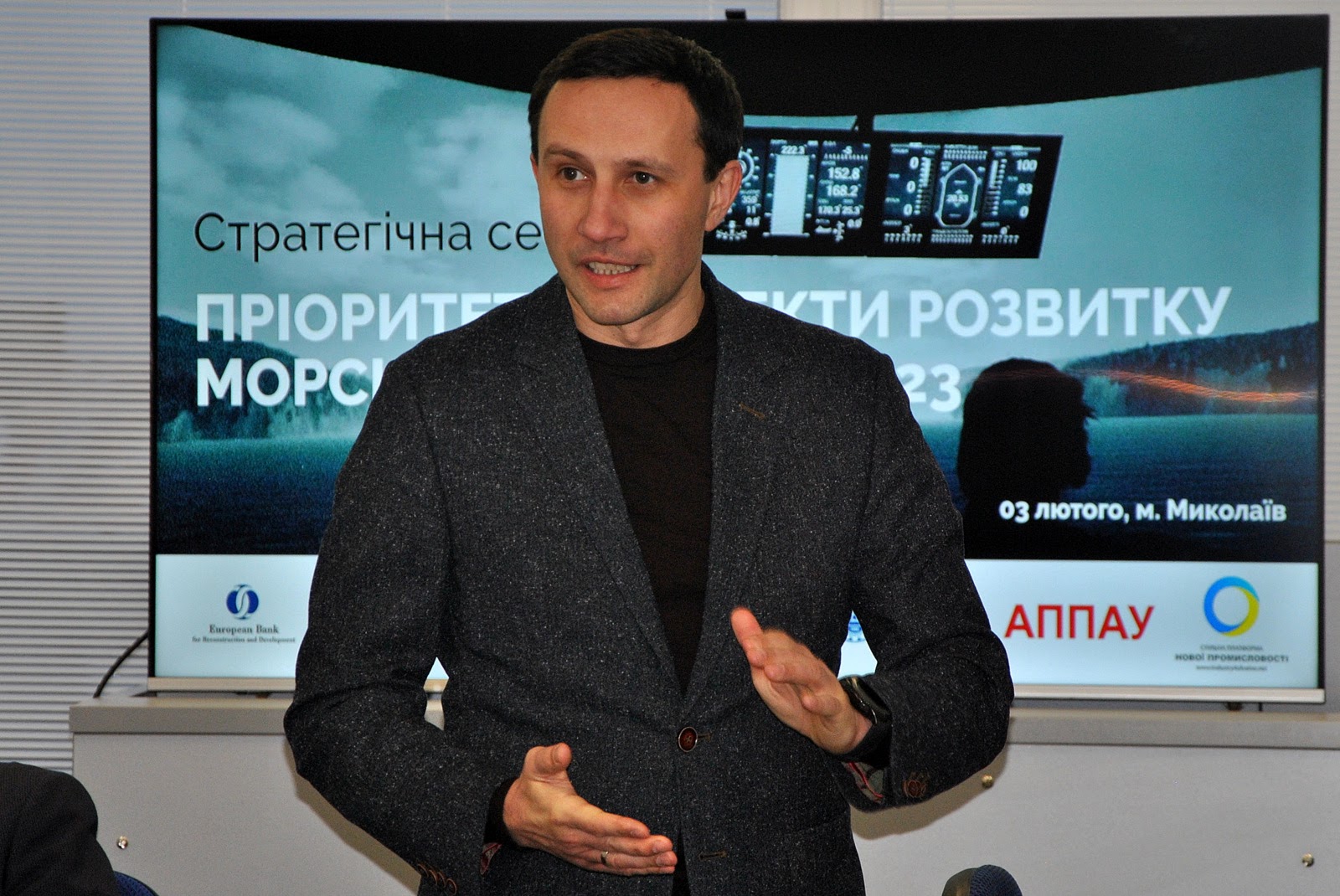 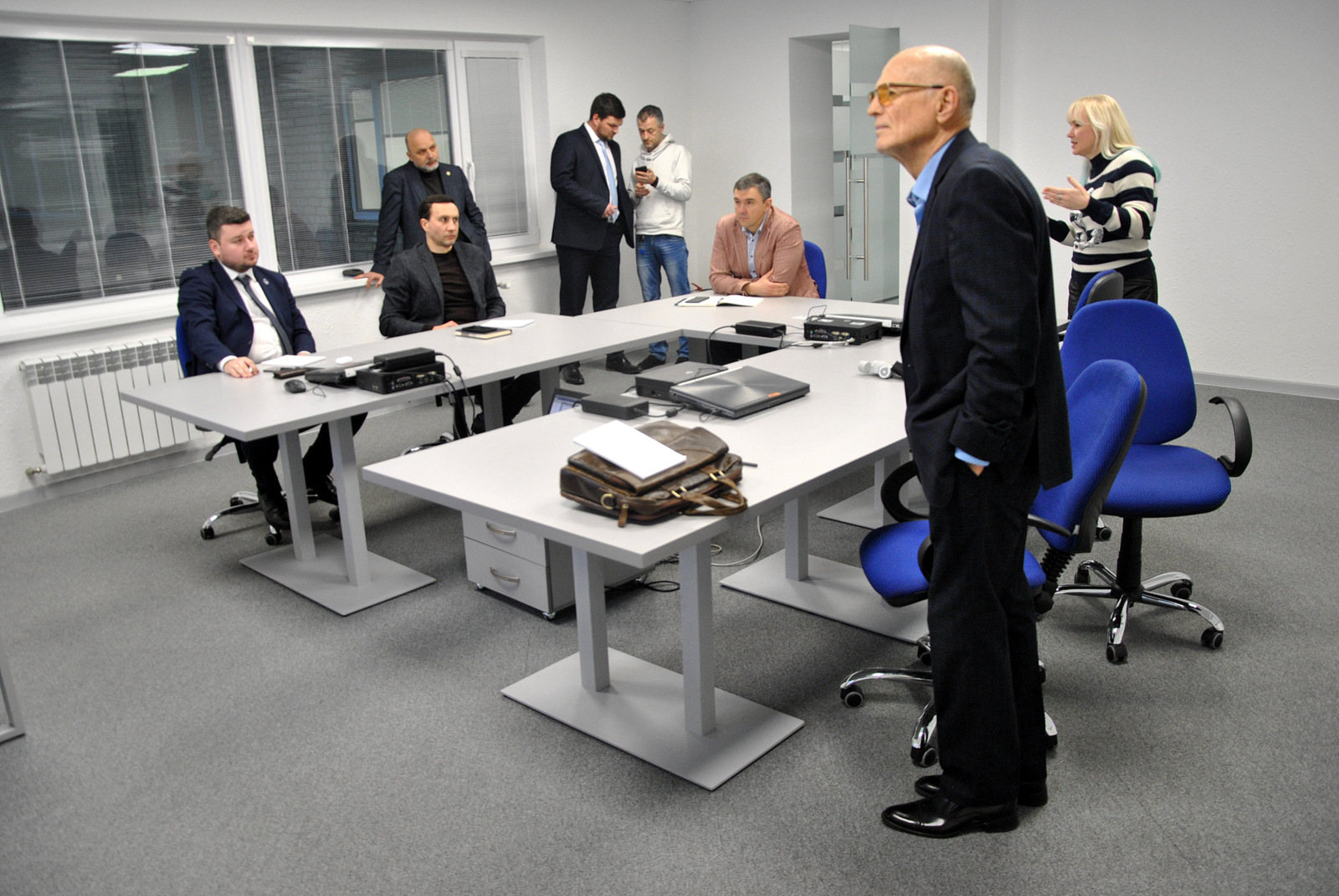 Further work of the UMC during the session continued in working groups, whose task was to form as many proposals as possible for promising cluster projects. 3-7 pilots will be selected  from the collected proposals for implementation within a month based on the results of elaboration in the working groups, and this will be the first step in the UMCpractical activities.

Among the many projects the next were offered: 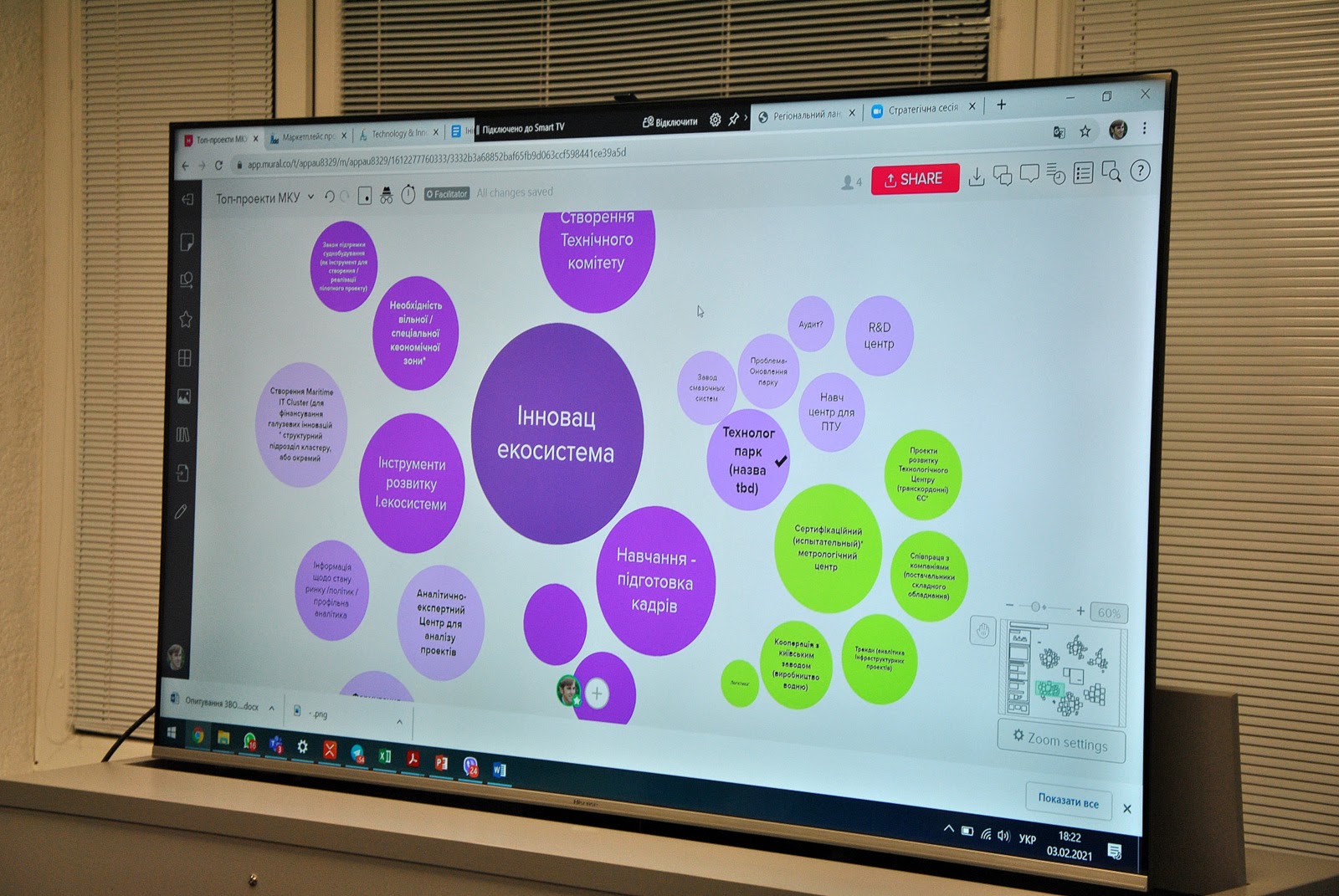 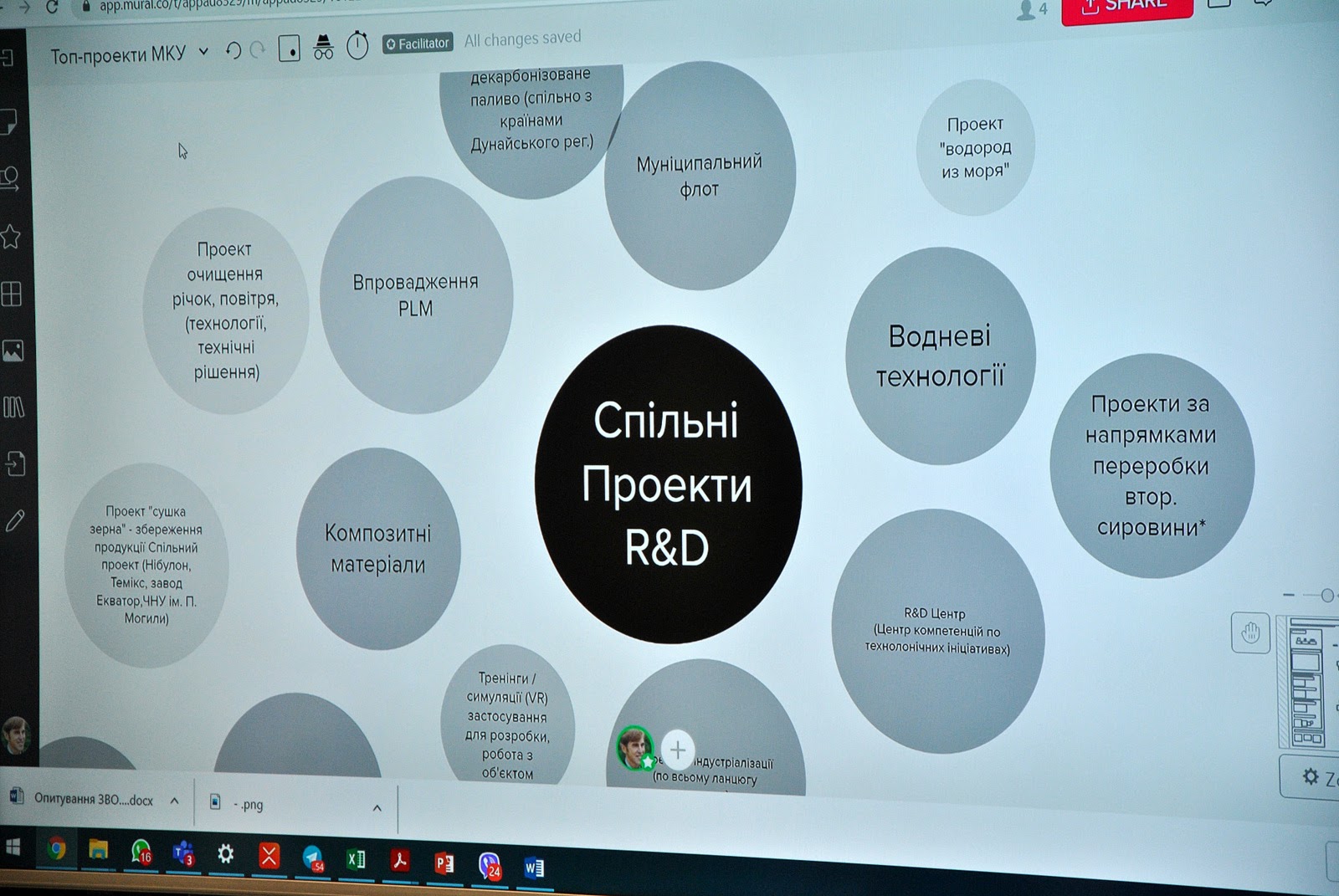 We will find out which projects have been selected for implementation during further activities of the Maritime Cluster of Ukraine in a few next weeks. 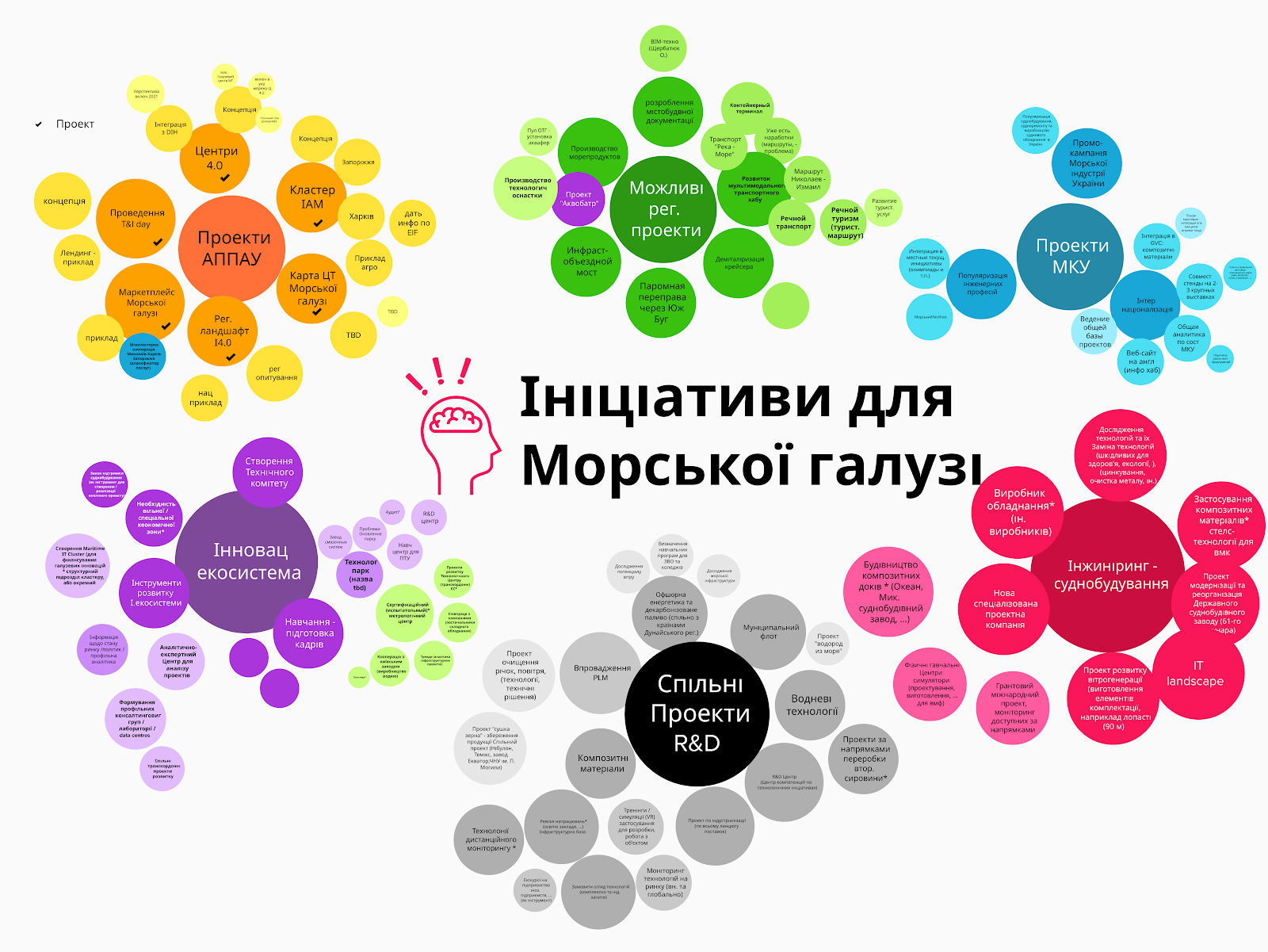 The recording of the event is awailable on the YouTube channel of the Business Information Support Center. 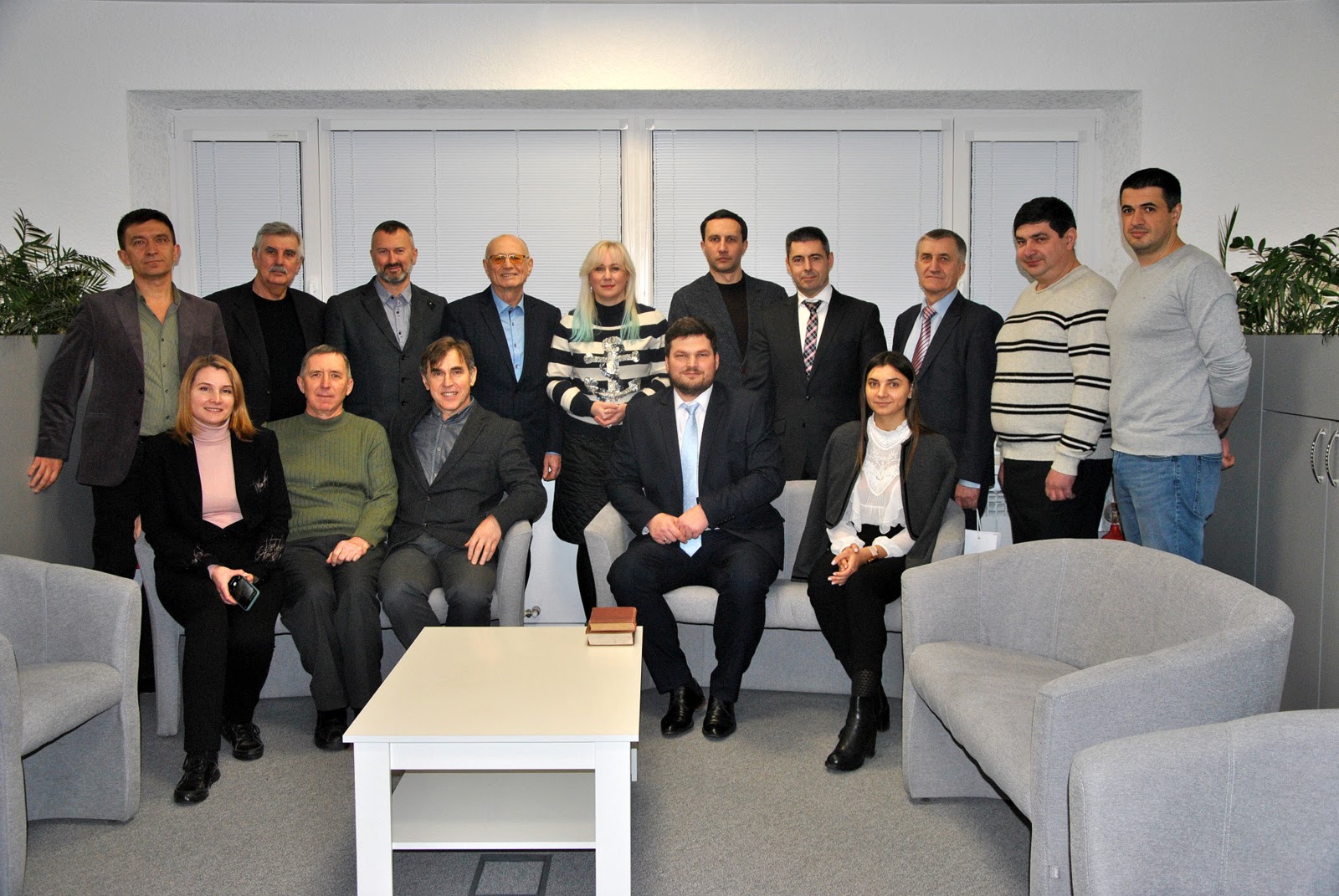